Sudeten and Carpathian Mountains and Alps, to a height of 2300 metres.

In autumn and winter it becomes obvious that the larch is not like other conifers. Unlike its relatives, as winter approaches this elegant tree sheds its needles after they have turned bright yellow. Mounds of larch needles and dead larch twigs then litter the forest floor and are a familiar sight to lovers of winter walks in the woods. The twigs are covered in clearly visible little spurs: the points from which the needles sprouted. The following spring the larch, which can grow to a height of 50 metres, develops new, strong, light-green needles which grow in soft little tufts along the branches and never become as hard as those of their coniferous cousins. The tree blossoms from March to May and the flowers are separated according to gender, although both grow on the same tree. The male catkins are about one centimetre long and dangle, round and pale yellow, from the branches. The female flowers are pink to dark-red in colour, and after fertilisation they develop into cones which stand upright on the twigs and grow to about three centimetres in length. The following year winged seeds ripen in the cones. Once they have flown away the cones remain hanging on the tree and only fall about 10 years later, together with the twig on which they grew.

The larch makes its home in high places, seeking light, open spaces where it can spread its branches

unhindered by shade. As a tree of the high mountains it can withstand extremes of temperature from minus 40 °C to intense summer heat. Its demands in respect of soil and water supply are modest. Its strong roots penetrate up to four metres deep into the earth where they find reserves of water and anchor in stormy weather.

The aromatic larch resin that is naturally exuded from the trunk of the tree is of primary interest for medical use. The resin is also the source of larch turpentine, which has anti-inflammatory properties. It is used to treat rheumatic complaints, boils, abscesses and inflammation of the respiratory tract. Anthroposophic medicine uses larch resin to treat degenerative processes and eye fatigue.

The Romans encountered the larch around 2000 years ago and called it larix – the name given to it by the Gallic population of the Alps. The scientific epithet decidua comes from the Latin deciduus = falling off, and describes the unusual habit of the larch of shedding its needles in autumn.

Although its needles appear airy, the wood of the larch is heavy, very resinous and thus very weather-resistant. In earlier times, hollowed out larch trunks served as water ducts for wells. As shingles the wood made a durable and reliable roofing material. Indeed, hard-wearing larch wood has many uses, including railway sleepers, fence posts, window frames, steps and floorboards. Venice is built on larch poles. In Zermatt in Switzerland a house built of larch wood is said to have stood for a thousand years.

Larch wood was already sought after in ancient times as a source of ‘Venice Turpentine’. Even today this resin is used in the industrial manufacture of paints and glues for glass and porcelain.

Some plants, such as the Flowering or Manna Ash (Fraxinus ornus) or the oak manna species Quercus vallonea and Quercus persica, exude a fluid which is 80% mannitol (a sugar alcohol) and is used as a sugar substitute, among other things. This sap known as manna is also found in the larch. Its needles

produce the so-called ‘Manna of Briançon’ which has laxative properties. Incidentally: the manna of the bible was probably not this kind of sap. It is more likely to have been a scale insect secretion or an edible lichen, Lecanora esculenta. Several types of fungi live in symbiosis with the larch: for example the edible and tasty larch bolete. However, the larch is resistant to pathogenic or wood-destroying fungi.

Since ancient times the larch has been regarded as a sacred, protecting tree. Thus in many regions of Germany, larch twigs are used to decorate doors and windows. They are called Hexenrüttel or witches’ wands and are thought to give protection against evil spirits and lightening strikes. Southern Slavs hang a piece of larch bark around their children’s necks to ward off the evil eye. It is said that good wood fairies like the larch. They are supposed to set up residence in the light larch groves and help lost travellers back on the right path.

A larch grove is unusually light for conifers and in this respect is closer to the character of the birch. This erect tree uses the power of the sun mainly for trunk growth and the production of the essential oils and resins which make the wood so hard-wearing. Larch resin thus has a sunny as well as a rigid side.

The uprightness of the tree stands in contrast to the growth of the branches, which spiral around the vertical trunk. Their movement gives life to the rigidity of the wood and they are the origin of the warming element of larch resin. Sunny, hardened and yet warmed through, larch resin unites properties that are of benefit in the treatment of eye disorders, in conditions typified by hardening and deposits, and in illnesses caused by getting cold, such as bronchitis. 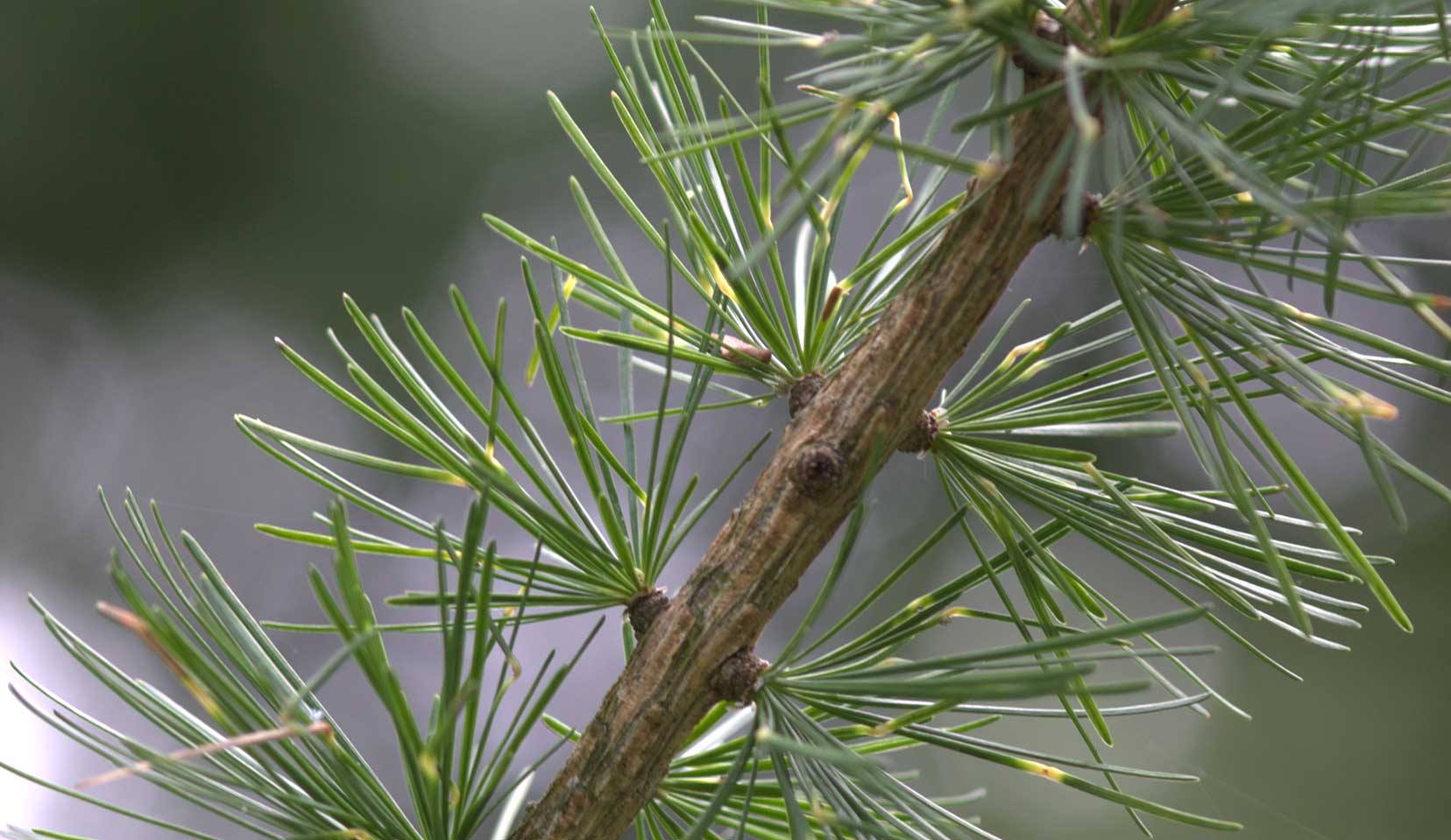