The plant is indigenous to the mountainous regions of Central Europe, from southern Norway and Lithuania in the north to southern Russia in the east.

The plant is indigenous to the mountainous regions of Central Europe, from southern Norway and Lithuania in the north to southern Russia in the east.

Arnica montana is medicinal plant of the year 2001. If you want to find it in the wild you will have to climb up high as this plant is at home in unfertilised or barely fertilised mountain pastures and in mountain heathland, where it displays its radiant yellow flowerheads from June to August. As in all members of the daisy family, the flowerhead consists of numerous individual florets: small tubular florets at the centre, surrounded by larger tubules with long petals extending outwards - the ray florets. A characteristic feature of Arnica is that this ray floret has three teeth at the tip. The robust stems bearing the flowers rise from a rosette of leaves and can reach a height of up to 50 cm. The whole plant is perennial and survives the hard mountain winter by withdrawing its energy into the rootstock.

As an important vulnerary, Arnica has wound-healing, disinfecting and anti-inflammatory properties. It helps to regenerate the tissue and is suitable for the treatment of all injuries resulting from impact, falls, stabs and cuts. In haematoma, muscle and tendon sprains, torn muscles, bruises and contusions it removes congestion and relieves pain. Arnica relaxes the tissue and makes it supple and is therefore irreplaceable in the prevention and treatment of sore muscles. Arnica ointment is important for the prevention and treatment of phlebitis. In inflammation of the mouth and throat gargling or rinsing with Arnica stimulates the circulation and the immune functions of the mucous membranes.

The origin of the name Arnica is disputed. According to some sources it is derived from the Greek arnakis = lamb's skin, an allusion to the downy sepals. Others see the name as an abbreviation of the word ptarmike from the Greek ptarmos = to sneeze. Dioscurides is said to have given this name to the members of the daisy family because of their tendency to cause sneezing. As third variant, the name is thought to originate from the Arabic word arnich.

One of the German names for Arnica is Wolfsblume or wolf flower. Arnica has the wild nature of the wolf. The entrapped mountain sunlight flashes from its flowers, reminding one of the yellow eyes of a wolf. In late summer, when the wind is rustles through the ears of corn, the corn wolf roams through the corn. In heathen times this mythological figure symbolised the strength of the field, the spirit of the corn, and provided the energy for ripening. As soon as he left the field, the corn withered. So farmers used to place Arnica around their fields to keep the corn wolf in. As "wolf's plant" they believed it could stop the corn wolf from leaving the field. As soon as the last corn was cut he would escape and slip into the last sheaf. This was often decorated and then carried into the village amidst great rejoicing. Later, farmers placed Arnica around the fields on Midsummer's Day to protect the corn against

Arnica was dedicated to Freya and was one of the most important herbs associated with the feast of St. John. Alongside St. John's wort and bracken, it was an obligatory part of any summer solstice ritual. Arnica was also believed to have magical powers that could influence the weather and used to be burned during thunderstorms. A German rhyme goes:

Arnica's yellow eye shines far across the mountain pastures with the form-giving power of the sun that is captured within it. In the summer it appears to open its eye without warning: suddenly the flower-crowned stem rises upwards from the compressed, flower-like rosette of leaves pressed closely against the ground. Arnica concentrates entirely on the flowering impulse and does not waste time on luxuriant leaf growth. It thus lives in the polarity of root and flower and appears to lack the connecting rhythmic element. It is this property that causes it to stimulate the rhythmic system in humans, the system that has a harmonising effect on the entire organism. External injuries have a lot to do with imbalances within the human organism. It is therefore understandable that Arnica's harmony-creating power stimulates healing processes. The form-giving character expressed in the plant's sun-like quality and in the wonderful order of the numerous florets that combine to make a flower also directly helps the damaged tissue which has lost its form.

As remedy of choice for sore muscles, Arnica is contained in Dr. Hauschka Birch Arnica Energising Body Oil, which has activating and relaxing action after physical exertion.

Its stimulation of the circulation supports the regenerating action of Dr. Hauschka Revitalising Hair & Scalp Tonic which strengthens the hair and scalp. 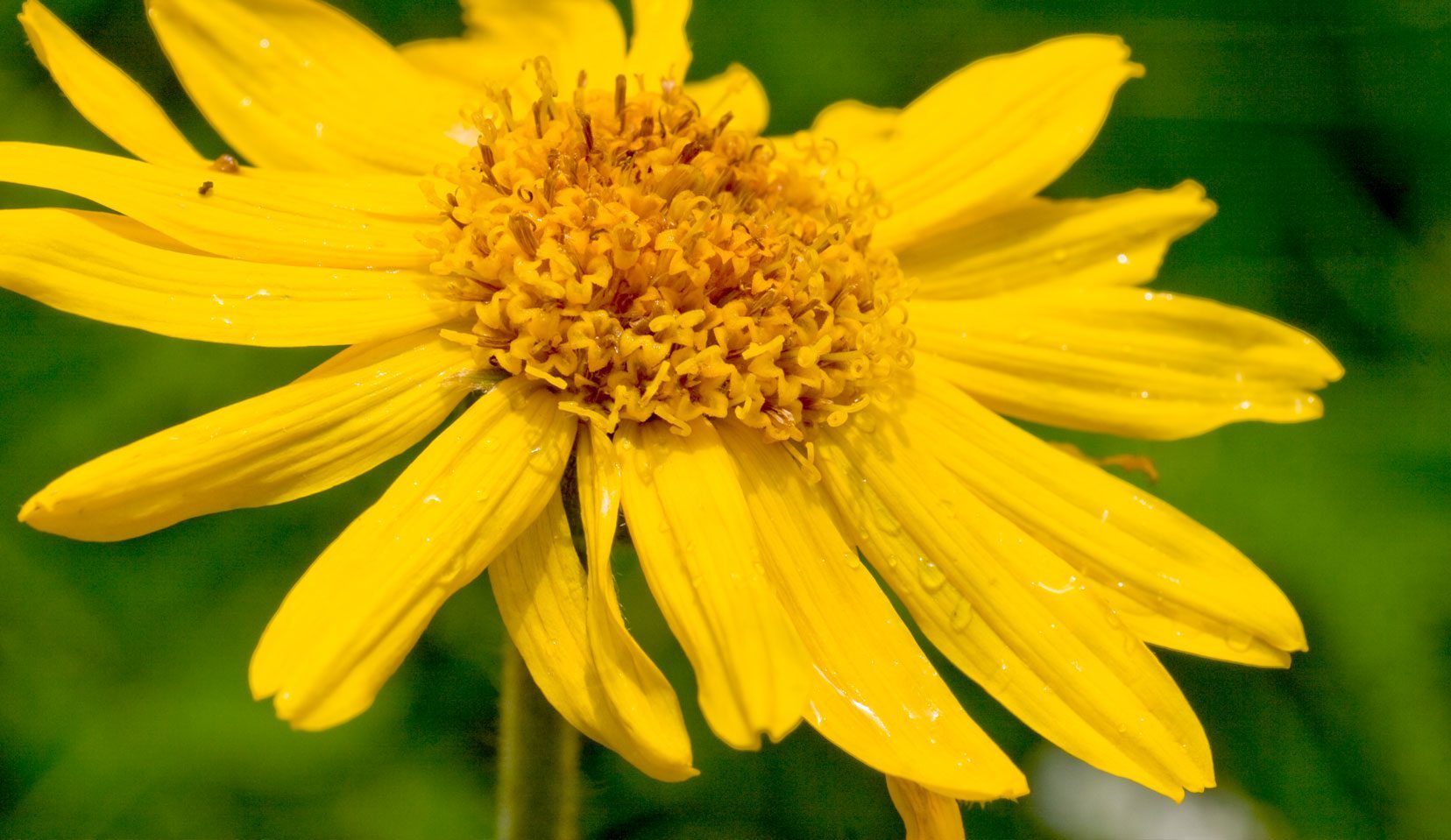