Thought to be the Near East and Eastern Europe.

Cultivated plants are impossible to overlook, but as its flower-bearing stems mature the hop is easily discerned even in its native habitat, hedges and copses close to water. In the wild these stems grow to a length of three to six metres; the stems of cultivated plants can reach up to 12 metres. They twine around other plants, twisting – unusually for climbing plants – in a clockwise direction, and reach lofty heights with the aid of climbing hairs which bend and cling at even the slightest touch. And they do all this at impressive speed. In just one day a stem can grow as much as 30 centimetres. From July to August the flowers develop, growing in among the leaves, which are rough and have three to seven lobes. Hops are dioecious, which means that plants bear purely male or purely female flowers – the flowers of most other plants contain both female and male parts. The male flowers are an inconspicuous greenish-white colour and bloom in loose clusters. It is the female inflorescences, which are wind-pollinated, whose characteristic appearance when mature is more familiar to us. The intrinsically inconspicuous flowers grow crowded together and surrounded by bracts, so that they resemble ears of corn. In due time they swell to form hop ‘cones’, each of which comprises up to 60 individual flowers. The scaly bracts of these cones serve to assist the flight of the ripe seeds and are equipped with glands that secrete lupulin, a sticky powder consisting of resins

and essential oils. As winter approaches, the perennial hop withdraws into its roots and the shoots above the ground die back entirely. Fresh shoots sprout the following spring from buds formed on underground rhizomes. Hops can be propagated from these rhizome buds once they have formed their own root system and have been separated from the mother plant.

For medical purposes the female inflorescences are more important. They are harvested shortly before fully ripening so that the scales of the hop cone do not drop off. If the secretions of the lupulin glands are to be collected separately, the dried hop cones are sieved. On shaking the bracts containing the glands fall off and at the end of this procedure a greenish-yellow, slightly sticky powder is obtained.

Hops have diverse types of action. Together with valerian they are one of the most important herbal remedies for nervous agitation, difficulties falling asleep and mild depression. They stimulate the appetite, have antibacterial action and are anti-inflammatory. In homeopathy hops are also used as a stomachic in cases of stomach ailments of nervous origin. As a home remedy it is used for cystitis and to treat ulcers and skin lesions.

The scientific name Humulus is probably the Latinised form of the Germanic names for hop, humilo, hymele or humili, all of which are derived from a word from the Ural region: qumlix. The epithet lupulus is thought to derive from the Latin for wolf, lupus, and could refer to the hop’s habit of entwining itself around other plants, like a wolf gripping its prey. However, lupus is also an old name for tuberculosis of the skin. Since the ripe fruits of the hop resemble this skin disease, the name lupulus could also stem from this meaning of the word lupus. Hops are best known as ingredients of beer. They are not only responsible for its pungent taste, but also improve the consistency of its head and prevent deterioration. Only female flowers which have not been fertilised are used for beer production. If seed gets into the beer, the head is much weaker. For this reason, hop growers only cultivate the female plants. Their care is among the most demanding in Europe. The climbing plant requires huge trellises, with wooden poles seven metres long between which wires are stretched. These are a feature of the landscape in all hop-growing regions. Hops are classed as a specialised crop and are certified, quality-guarantee seals documenting the rights of cultivation. Germany, incidentally, is the biggest producer of hops in the world.

Beer brewing has a long history – beer in this context referring to an alcoholic beverage brewed from fermented grain. The Sumerians practised brewing as early as around 4000 to 2000 years BC. The oldest recipe for beer ever found was discovered in present-day Iraq, inscribed on a clay tablet. For the Egyptians, beer, together with bread, was a staple food. In Central Europe, too, a beverage similar to beer is thought to have been brewed as early as the 16th century BC. However, sources give contradictory information as to the ingredients of the brew. What is clear is that honey for sweetness and various plants were added to make the drink more stable or add flavour. Among the ingredients added were oak bark and herbs such as myrtle or St. John’swort, as well as intoxicating herbs such as henbane and thornapple. It is not clear when hops became involved. Findings from early settlements confirm that the hop was used all over Europe in the New Stone Age as people started to become settled. The small amounts found indicate that it was used exclusively as a medicinal plant or flavouring. Documentary evidence does exist for hop gardens established for beer brewing in the Middle Ages. These go back to Pippin the Younger (714 – 768), father of Charlemagne, who presented them to the Abbey of St Denis near Paris in 768. Beer seasoned with hops became an important part of their fasts for the monks, being not only nourishing, but also suppressing sexual arousal, due to components of hops with estrogen-like properties.

In the Slavic regions, in contrast, the hop was regarded as a symbol of fertility: Slavic peoples showered their brides with hops and crowned them with the plant. This symbolism would seem to contradict the use of the plant as an anaphrodisiac. However, phytoestrogen-containing plants inhibit the male sexual drive, but are thought to stimulate it in women.

The medical importance of the hop, which was designated medicinal plant of the year in 2007, was documented only relatively late in Europe. Its sleep and digestion stimulating properties were probably first described by the Arab physician and botanist Abdullah Ibn al-Baytar (1197–1248), who lived in Spain. In their writings the abbess Hildegard of Bingen (1098–1179) and the Bishop of Regensburg and Doctor Universalis Albertus Magnus (c. 1200–1280) emphasised the preservative qualities of the hop. Knowledge of the calming effects of hops was lost again to a great extent in later times, and only experienced a renaissance in the 18th century. Then, hop pillows helped alleviate the insomnia of the British king George III (1738–1820). The prominent physician Christof Wilhelm Hufeland (1762–1836) discovered hops as bitters to aid digestion and as a sedative to soothe the nerves. In his Handbuch der speziellen Arzneimittel (Manual of Special Medicines), Johann Christian August Clarus (1774–1854) recommended hops as a treatment for poor appetite associated with gastric catarrh, for the

mucous membranes of the stomach and for insomnia. Unconnected to European reports, North American Indian tribes and Ayurvedic medicine are known to use hops.

But the hop is not only a medicinal plant and the basis of beer. The Roman scholar Pliny the Elder (c. 23–79 AD) described its young sprouts as being very tasty when prepared in the same way as asparagus. The hop is also a source of natural fibres, but these are so brittle that they furnish only coarse cloth and rope.

Restless and in a rush, the hop climbs to giddy heights before stopping to form flowers and fruits which hang down heavily on compressed stalks and form a stark contrast to the plant's upward growth. These flowers are very inconspicuous. On the other hand, the hop produces something flower-like in the lupulin, with its resin and essential oils, which aromatically envelops the female flowers. It might be said that the hop has concentrated the power of its flowering. Excessive growth is followed by consolidation and internalisation. This image could reflect the nervous individual who cannot find repose and only falls into a dreamless sleep at the moment of deepest exhaustion.

Hops round off the formula for Dr. Hauschka's Almond St. John’s Wort Soothing Body Oil, with its soothing effect on sensitive and dry skin. 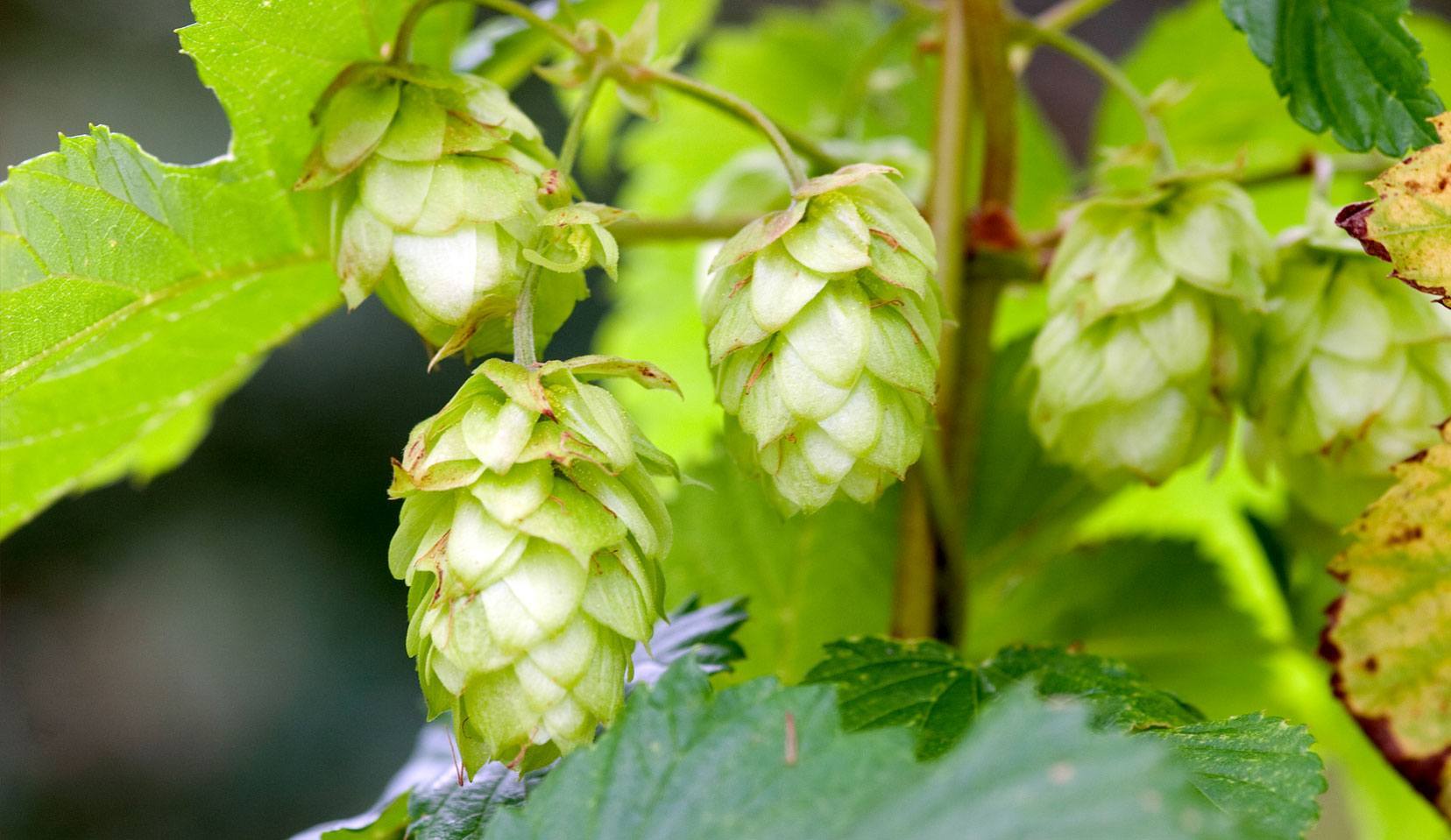