The steppes of the high mountainous regions of Central and East Asia.

The name buckwheat derives from the Dutch Boek-weit, meaning beech-wheat, which is also the meaning of our German Buchweizen. But buckwheat is related neither to the beech nor to wheat: it is in fact a close cousin to sorrel and rhubarb. All three belong to the knotweed family, named for the thick knotted joints on their stems. Buckwheat is a slender annual with an erect, reddish stem and triangular leaves. From June to September cluster-like inflorescences, consisting of numerous red or sometimes white florets, sprout from the leaf axils along the stems: the latter can grow to a length of 60 centimetres. A single plant can produce 300 to 1800 perfumed flowers, each of which blooms for one day only - such that a buckwheat field in full bloom resembles a meadow covered with a blanket of red-tinged snow. Within the flowers ripen the small, dark brown nuts with three sharp edges typical of this plant. With its extra long root hairs, buckwheat can find minerals and water deep underground, allowing it to thrive in poor, sandy soil, for example in foothills and high mountains.

The flavonoids contained in buckwheat improve the microcirculation, i.e. the blood flow and nutrient exchange in the smallest blood vessels – the capillaries and venules. They also diminish the tendency for fluid from the capillaries to escape into the surrounding tissue. In this way they help to reduce or counteract oedema. In addition, flavonoids have antioxidant properties.

Extracts of buckwheat relieve symptoms associated with impaired microcirculation. For example they are beneficial in cases of chronic venous insufficiency, a condition affecting the veins and the skin.

Through the many plant secondary metabolites they contain, extracts of buckwheat, applied externally, help to protect and revitalise the skin and strengthen the cells.

The scientific name Polygonum is derived from the Greek polygonos = many-angled, and describes the shape of the fruits. The epithet fagoyrum is composed of the Latin words fagus = beech and pyros = wheat, and therefore corresponds to the common name. In Germany, the earliest record of the name is found in documents from Lüneburg dating from 1385. The name was given because buckwheat fruits are used like wheat and are similar in appearance to the fruits of the beech tree, the beech nuts.

The oldest buckwheat finds to date were made in the steppes to the north of the Black Sea, in what today is the Ukraine. Buckwheat fruits were found there in Scythian settlements from the Ice Age (7/6th and 5/4th centuries BC). Trade and later the crusaders spread buckwheat as far as the Netherlands. The main regions of cultivation in Germany used to be areas with poor sandy or peaty soil, on which buckwheat thrives.

Examples of such areas are the Lüneburg Heath and Mecklenburg. Dutch settlers took the plant to North America. In the course of the 18th century, with the spread of intensive farming and the use of fertilisers, buckwheat began to lose its importance. Today it has found new popularity among those looking for a gluten-free alternative to cereals, and forged a niche

for itself in agriculture. On a global scale this food source is not very significant: the largest areas of cultivation are found in China, Russia and the Ukraine.

The nutty-tasting buckwheat fruits can be used as an alternative to cereals and are rich in vitamins and minerals, especially calcium and vitamins of the B-complex, as well as valuable vegetable protein. A buckwheat porridge known as Grechnevaya Kasha is very popular in Poland and Russia, and most of us have heard of bliny, which originally came from Russia. Europe has also produced numerous buckwheat recipes. The Italians, for example, use buckwheat flour for a pasta called pizzocheri; the French make pancakes from buckwheat flour, which they know as blé noir, or black wheat. Groats were popular with seafarers in the 17th and 18th centuries because they were nutritious and long-lasting. The sweet-scented and nectar-rich buckwheat flowers are highly valued as bee forage. Hens are given buckwheat as feed concentrate; pigs eat buckwheat bran.

The medical significance of buckwheat was discovered only recently, however. Research revealed it to be one of the plants richest in flavonoids, and in 1999 it was voted medicinal plant of the year.

For processing in skin care products buckwheat is harvested before it is ripe, when the plant is still in full bloom and before it produces fruits. The best time for harvest is around the summer solstice on 21 June, when the flavonoid content is at its highest.

The buckwheat used in Dr.Hauschka Skin Care products is obtained from organic cultivation in Germany. The dried plant (the so-called crude drug) provides skin-protecting, cell-strengthening and revitalising extracts for use in Dr. Hauschka Soothing Mask. 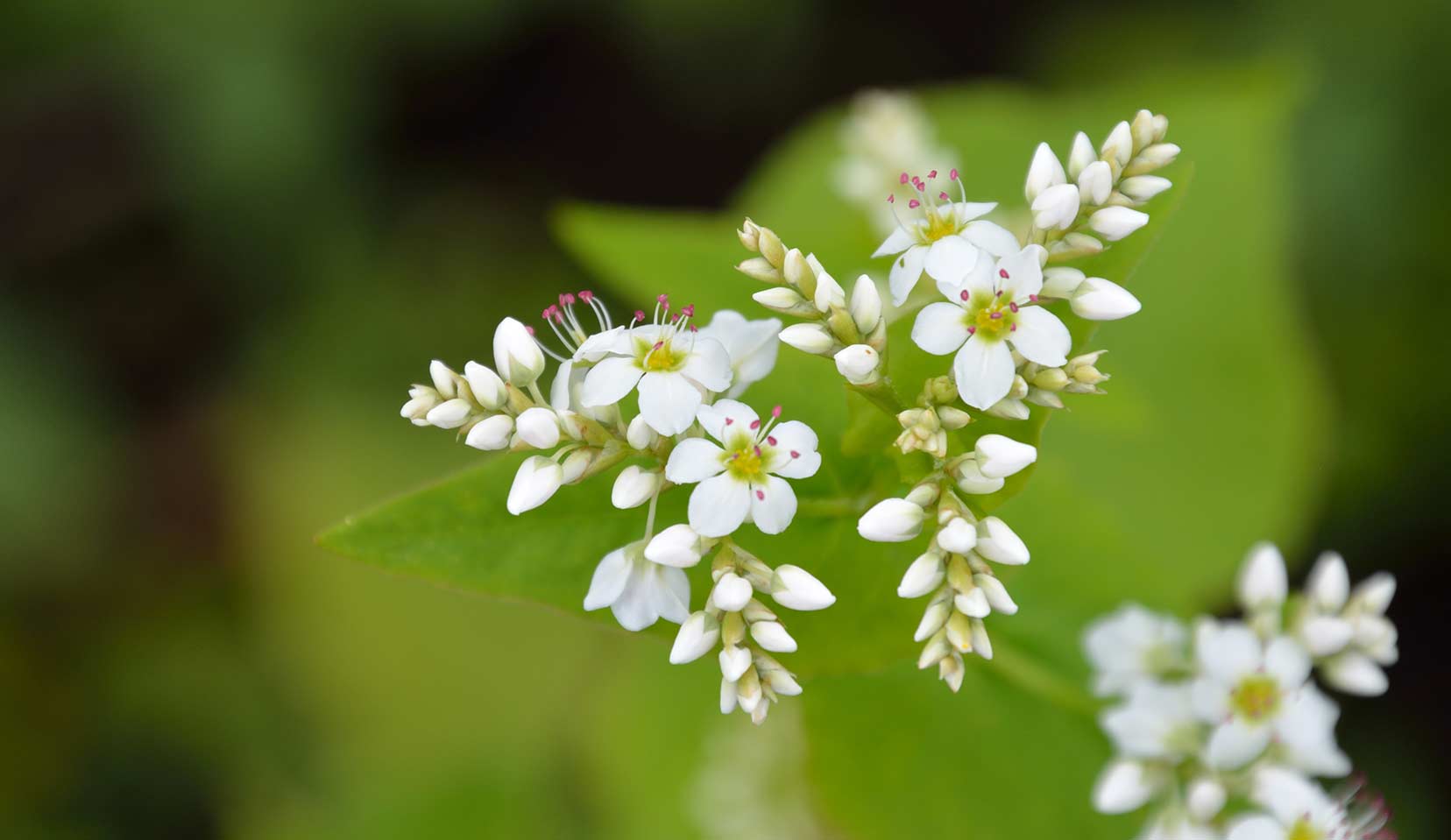