The quince probably originates from the Caucasus and was already cultivated in ancient Greece. It was first mentioned by the Roman historian Pliny (24 to 79 AD). Quince was widely cultivated as a fruit in Central Europe up to 1900 but the increasing popul

The quince, which grows as a shrub in the wild, is a small tree only about 3 to 4 m (9 to 12 feet) high. From May to June it produces large cup-shaped flowers which are white to delicate pink. The fruits, which weigh 300 to 500 g, are pear- or apple-shaped depending on the variety and are covered by a characteristic felty coating. This wipes off easily, revealing the wax-coated skin which emanates a sweet, fresh fragrance when rubbed. Although it has been cultivated by mankind for thousands of years quince has undergone little change as a result of selection and has thus largely retained the character of a wild fruit.

For cultivation a sheltered site should be chosen as the wood is sensitive to frost. The quince is generally free of pests and diseases. One exception is fire blight to which it is particularly susceptible. The ripe fruits are harvested from September to October. If the fruits are to be stored the best time to harvest is when the color begins to turn from green to yellow. Stored in a cool place without touching, the fruits remain fresh for up to 10 weeks.

Even when fully ripe, the bright yellow, aromatically fragrant fruits are not usually suitable for eating raw as the flesh is very tart and remains hard and woody. Cooked and sweetened, however, it unfolds a typical, enticing aroma and the fruits are therefore used to make jellies, compotes, juices and cakes. The quince mucilage relieves irritation. A seed extract is therefore used as a cough remedy and for treatment of gastric and intestinal catarrh. Mucilaginous compresses made from the crushed seeds can be applied to wounds and inflamed joints. The mucilage is also used as a gargle for sore throats.

In ancient times the quince was also regarded as a symbol of happiness, love and fertility. Thus, according to Athens law, the young bride had to eat a quince on the threshold of the bridal chamber, in the belief that the wife would bear her husband as many children as the quince contained seeds. We hope for the bride's sake that the quince was cooked!

The fruit is also reputed to help against drunkenness: "Eaten while drinking, quince prevents the vapors of the wine from rising to the head" (Simon Seth, physician in the 11th century AD).

Incidentally the name quince is derived from the Greek "Kydomalon". Kydonia is a town in Crete and "malum" means apple. Kydomalon is thus the apple from Kydonia. Kydomalon then became "Cydonium", from which the English name "quince" developed (ky = qui).

The quince is a delicate, vulnerable plant which has learnt to protect itself. However, this protection does not give it a hard exterior, but it rather has a soft and downy coating. Woody structures in the fruit retain moisture. The high mucilage content combines essential oils and fats with water. 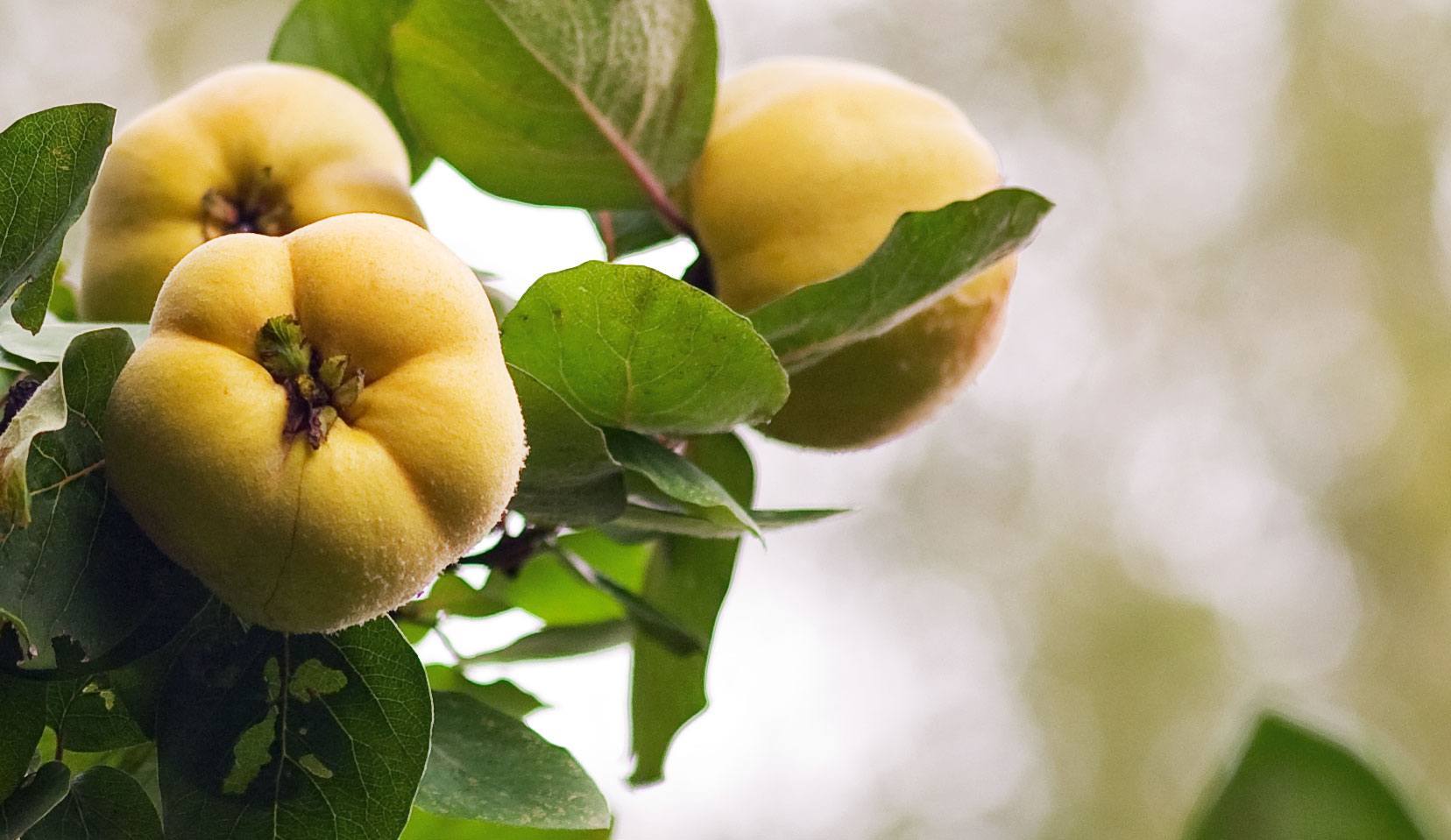