Blackthorn was originally a native of central Europe. Thanks to its hardiness it has become widespread and is now found from southern Sweden to the Urals, and in the moderate zones of Southwest Asia, North Africa and North America.

The dense, spreading, much-branched thorny shrub, which can reach a height of up to 3 m (9 feet), flowers from March to April. The small white scented flowers appear before the leaves. They are usually solitary, on short stems, but cover the entire length of the branches so densely that the whole shrub is shrouded in white. In May, after the flowers, the oval, tooth-edged leaves appear, and in late summer the bluish-black plum-like fruits which have a whitish bloom and astringent green flesh. They are 1 cm in diameter, contain a stone and are only edible after the frost. The thorns, incidentally, are transformed lateral branchlets.

Blackthorn likes sunny hills and dry, sparse deciduous woods with chalky, deep soil. Together with other members of the rose family it often forms impenetrable thorny thickets. The light-loving blackthorn is extremely resistant to pests and regenerates quickly after cutting. It spreads through seed dispersal by mammals and birds and by production of root suckers. Even on wind-exposed sites it defies the natural forces. So it is not surprising that it was used as pioneer wood for stabilizing embankments and dry slopes and for landscaping slag heaps and wasteland, as well as for wind and snow screens.

Medicinally blackthorn has astringent, mildly diuretic and laxative and anti-inflammatory action. An infusion made from the dried flowers is used for blood cleansing in skin diseases and rheumatic complaints and as a gargle for mild inflammation of the mouth and throat. A compote or jam made from the berries combats poor appetite. In folk medicine there are some fantastic sounding customs: in the Tyrol a sloe is tied to the left side of the chest as a remedy against jaundice. In many regions there is a custom of eating three flower stalks of the blackthorn bush three times in succession. This is said to provide protection against fever and gout.

Anyone who tries to get through a blackthorn hedge will realize where the Latin name "spinosa" (= thorny) comes from. The alternative common name, sloe, is of Germanic origin (old high German "slêha") and is probably related to the old Bulgarian "sliva" and the Latin "lividus" = bluish. The name sloe would therefore refer to the blue fruits. The name blackthorn, on the other hand, refers to the black bark of older blackthorn trees.

Blackthorn was important for humans in very early times. Archeologists have found fruit stones at the sites of Neolithic pile villages. The Arabs, Greeks and Romans and people in the Middle Ages used the flowers and fruits as medicines and food. Asclepiades (124-60 BC) and Andromachus (3rd century BC), for example, praised a thickened fruit juice from sloes as an effective remedy for dysentery. The tough wood of the undemanding blackthorn was popularly used in turning work. The bark provided transparent, paint-like, light and water-resistant ink, the fruits a red and the bark a brownish dye for wool and linen.

The ancient Teutons already knew about the protective action of the blackthorn: together with hawthorn it was used for the first garden hedges which protected apple trees and herbs from game-damage. Incidentally, the Indogermanic word "gher" (= to catch) developed into the word "ghortos" which means literally "fenced in, enclosed", and from there into the word "garden". It was thus the fence

that gave the garden its name, the woven fence or the protecting hedge enclosing a piece of land along the wall of a house.

In some places blackthorn is believed to ward off spells and have prophesying powers. In the night of St. Ottilie it was customary to burn blackthorn branches as incense and on Walpurgis night blackthorn was burnt together with juniper and rue to ward off evil spirits.There are two German farmers' sayings connected with blackthorn blossom:

Blackthorn provides a richly decked table for numerous animals: the lush flowers are welcomed by early flying insects, for example domestic bees, many wild bees (sand bees, cuckoo bees and others), bumble bees, beetles and flies. The leaves, which appear later, are particularly popular amongst caterpillars, for example those of the Scarce Swallowtail, the Brown and Black Hair Streak, the endangered Small Emperor Moth and especially those of the sociable Ermine Moths which build silky tents in the branches and are sometimes so numerous that whole blackthorn populations

are stripped bare. The birds that nest in the blackthorn, such as the Red-backed Shrike and the Yellowhammer, find a veritable land of milk and honey there. For birds and mice which depend on berries in winter the spiny shrub with its bluish-black fruit is an indispensable larder and guarantee of survival.

Today the fruits of the blackthorn are still used to brew warming drinks for harsh winter evenings: sloe wine and sloe gin make you feel cozy indoors while the snow rages outside. But syrups, jellies and jams are also a vitamin-rich delicacy.

Several curious customs can be found in folk medicine: in Tyrol, a blackthorn fruit is placed on the left breast to combat jaundice, while in many regions, people follow the custom of eating three flower stems from a blackthorn bush three times in a row to protect themselves against fever and gout.

The way that blackthorn deals with and embraces the cold is amazing. The snow has barely thawed when, even before its leaves begin to grow, its radiant white blossoms open up and herald their sweetness. The blackthorn needs the cold at the end of the year to add the hint of sweetness to its acidic, astringent fruits. Despite requiring and embracing the cold, it also combats it with its inner fire – warmth which it passes on to humans. It is also notable that the blackthorn once truly reveals its full splendour once a year: during its exuberant period of bloom. For the rest of the year, it shrinks away, as can be seen from the black wood with its sharp thorns and little, acidic fruits. These contain the blackthorn’s fire, which it only slowly releases. Not a rapid ‘flash in the pan’ fire, but a long, radiant glow that offers us continuous warmth.

Dr.Hauschka Blackthorn Toning Body Oil strengthens and warms the skin. With its pleasant fragrance, the harmonious composition of blackthorn blossom, birch leaves and St. John'swort firms and purifies the tissues. The skin-strengthening properties give the skin a fresh, well cared for appearance.

Fully ripe blackthorn fruits harvested in the wild are carefully processed to essences which round off the composition of Dr. Hauschka Lemon Lemongrass Body Moisturizer, Quince Body Moisturizer, Deodoran Fresh and and St. John'swort Foot Cream. 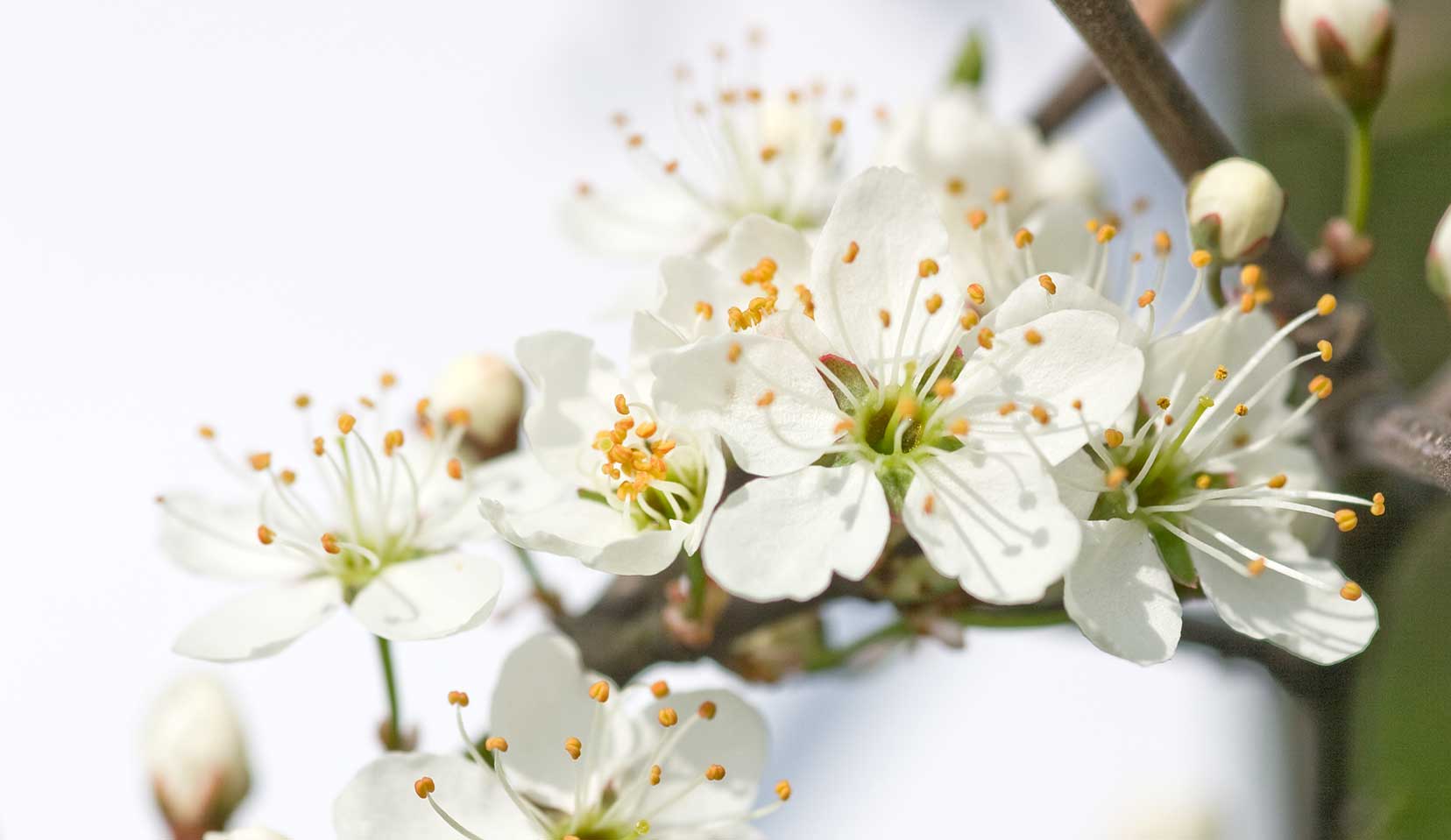