Originally a native of South Africa. Did not reach Europe and America until the 18th century and the Canary Islands until the 19th century. Has now also spread to southern Australia and coastal areas of Japan.

The sun beats down relentlessly on the South African soil. If you don't want to die of thirst here, you have to have some tricks up your sleeve. The ice plant is a specialist when it comes to getting water. It thrives on sandy-clayey and even salty soils where it can cover areas of up to 0.7 m² in the beating sun. Its secret lies in its green or sometimes intensely red leaves. They are thick and succulent and covered with glittering fluid reservoirs which sparkle in the sun like dew drops or ice crystals. But how can it accumulate so much water in such a dry climate? We'll tell you that later.

From July to September the annual to perennial, frost-sensitive ice plant is covered with numerous white to reddish flowers with radially arranged petals. This opulence stands in contrast to the root which is only a few centimetres long, giving the impression that it is only there to hold the plant in the soil rather than to supply it with water. In damp weather the capsules burst open, releasing the grey-brown seeds which need the heat of their native habitat to ripen.

The ice plant is said to have diuretic action. Samuel Hahnemann wrote:

"The freshly pressed juice of the plant (Mesembryanth. crystall.) which has a watery and nauseating taste, has been commended, with little supporting evidence, as being effective against dropsy and strong urine as a diuretic, diluting agent."

Ice plant is used in ascites (accumulation of fluid in the abdomen), dysentery, liver and kidney diseases and pneumonia. Used externally it relieves itching, pain, swelling and redness of the skin.

The generic name Mesembryanthemum comes from the Greek words mesembria = midday and anthemon = flower. Both the generic name and the German name Mittagsblume (noon plant) are a reference to the flowers which only open when there is strong sunshine, i.e. usually at noon. The family name Aizoazeae, from the Greek word aizoon = living eternally, describes the robustness of our plant.

But we promised to tell you how the ice plant manages to cope with such great heat. It does this by holding its breath during the day. Normally plants take up carbon dioxide during the day and convert it to sugar and oxygen with the help of sunlight. The plant breathes through pores on the undersides of the leaves but it also loses water through them. So the ice plant closes these so-called stomata during the day and only breathes after sundown. The carbon dioxide it takes up is bound to a molecule and processed to sugar and oxygen the following morning by means of photosynthesis.

But that is not all. The ice plant has the initially perplexing oddity that it accumulates salt. Any normal plant dies if it is exposed to too much salt. We are familiar with this after cold winters when we find that the salt put on icy roads has damaged the vegetation. But in coastal areas the ice plant even takes up salt from the air if the soil is not salty

enough. What does it do with it? The salt stimulates the production of fruit acids in the plant. And these, together with sugar alcohols, abundant magnesium and the amino acid proline, provide a natural moisture retaining factor. So these constituents of our plant actually attract and bind the little moisture present in its environment. This is demonstrated particularly impressively by cut branches which do not dry out until after many weeks. The red colour of the leaves completes the heat protection. The colour comes from the so-called betacyanins, pigments which absorb light and thus provide natural protection against the sun.

On account of its high salt content the ice plant leaves behind salty soils wherever it grows. As this makes the soil barren for other plants the earlier practice of planting ice plant to prevent erosion has now largely been abandoned.

The leaves of the ice plant make a spinach like vegetable. South Africans chew the fermented leaves.

On the Canary Islands the ice plant used to be used to obtain soda (sodium carbonate) which is found in large amounts in the ash. This is the origin of its one of it's German names: soda plant. Incidentally, it was a nurse who discovered the healing powers of ice plant in itching, pain, swelling and redness of the skin. When Waltraud Marschke was working at the

centre for anthroposophical therapies on the Canary Island of Lanzarote she was struck by this wondrous plant. In 1988, after extensive practical trials with the ice plant, Nurse Waltraud published her knowledge, which is increasingly gaining ground.

The prolific leaves of the ice plant seem to embody within themselves the qualities of the entire plant. Their reddish colour mimics the character of a flower; the reserves of liquid and moisture-retaining factor compensate for the shortness of the root, which is just a few centimetres long and appears to exist to anchor the plant to the ground, rather than to provide it with water. The root of the ice plant is allied to the nerve sense organs of the human being, which include the skin. The plant integrates the tasks of the root into the harmonising leaf system, which is allied to the rhythmic processes in the human being. It thus sets an example to irritated skin, which is, in a manner of speaking, under nervous strain.

The robust ice plant, which has learnt so well to bind moisture, is the perfect ingredient to round off Dr. Hauschka Med Ice Plant Body Lotion and Ice Plant Intensive Cream, as well as Dr. Hauschka After Sun and Soothing Intensive Treatment. 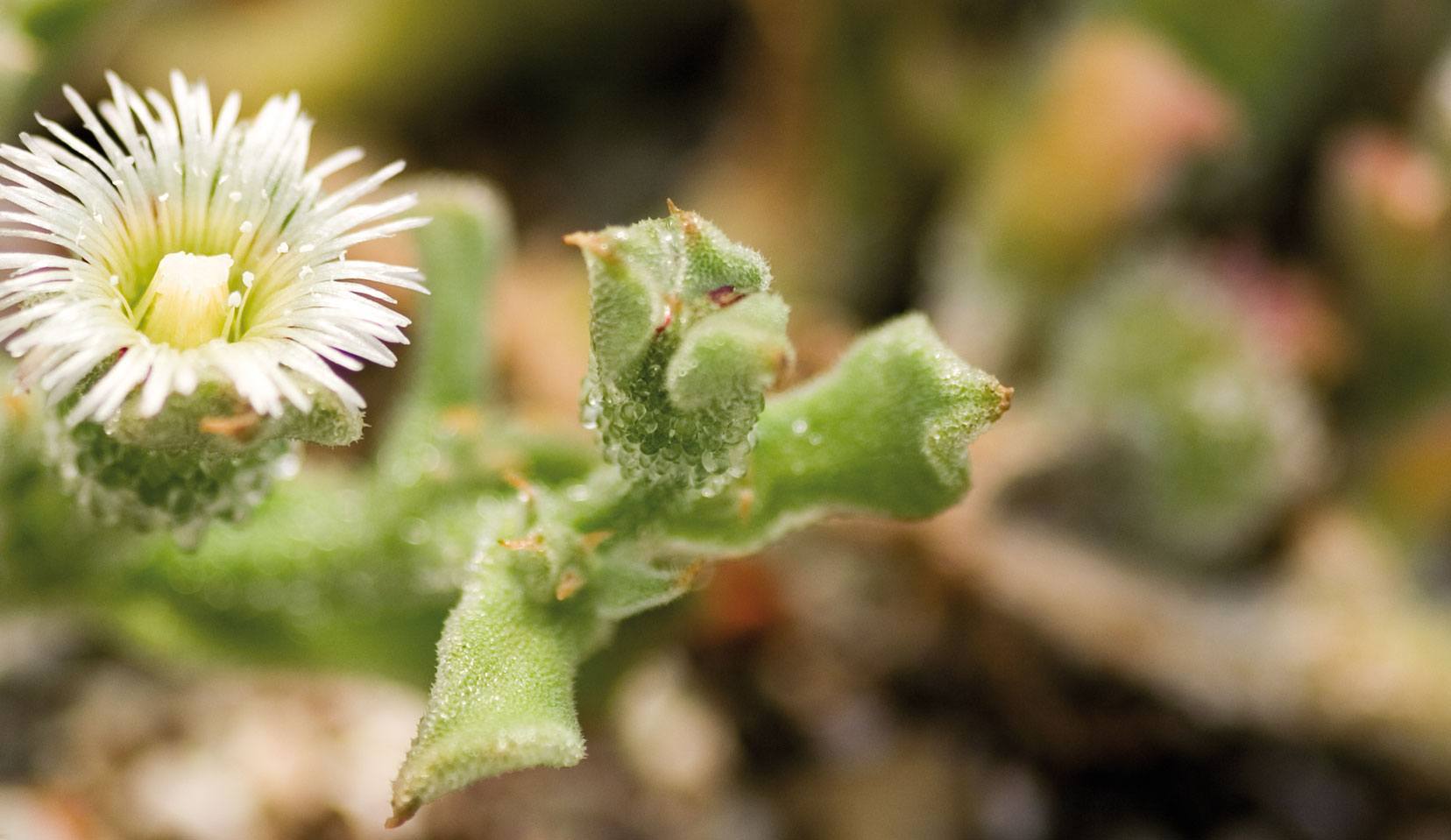