Thought to be a native of the semi-deserts between Turkey and Afghanistan. Spread to Carthage and Greece with the Phoenicians, to England with the Romans and from there to Central Europe.

The Madonna Lily is the lily par excellence. Its large pure white, trumpet shaped flowers with yellow anthers bloom in June and July. Between 5 and 20 of these flowers, which give off a strong, sweet perfume, cluster around a stem about 1.20 metres high. Lilies are bulbous plants. The bulb of the majestic, warmth-loving Madonna Lily is a so-called scaly bulb which stores nutrients in its thick fleshy “scales”. If you want to grow Madonna Lilies in your garden the bulbs should be planted in the late summer of the previous year. In the autumn the bulb produces a tuft of leaves through which the lily builds up its strength before the winter.

The Madonna Lily was already recommended as a medicinal herb by Pliny and Dioscurides, particularly for women's diseases. The Egyptians also regarded the Madonna Lily as "healer of female disorders". Egyptian doctors crushed the mucilaginous bulb and used it for emollient compresses for treating tumours, inflammation and burns. Lily oil brought relief in the treatment of burns and earache.

The Romans are said to have steeped the bulbs of the Madonna Lily in oil and used the extract to care for their sore feet.

"O radiant Lily, how with the paltry art of my sober muse Can I bring you worthy praise in song and verse? Your shimmering white is the reflection of snowy lustre, The sweet scent of your bloom a reminder of the woods of Sheba. Parian marble does not surpass the whiteness of the Lily, Nor Lavender its perfume. And when the treacherous serpent Cunningly concentrated poison from corruptive mouth Doth spit, and through scarcely perceptible wound Cruel death into the innermost heart doth send, then crush lilies in a mortar And, this is expedient, drink the juice with heavy Falernian wine. Or

for contusions put it on the blue tinged parts, soon here, too, will be revealed the powers With which this healing substance is endowed, working wonders. Finally, lilies are also helpful for sprained or twisted limbs."

Hildegard von Bingen recommended lily water and ointments for skin rashes and blemished skin. According to her this pure flower could also brighten the spirits:

"The scent of freshly sprouting lilies and the scent of the lily flowers gladden the heart and set the mind aright."

Lily petals crushed and mixed with honey are said to make the skin soft and help reduce lines and wrinkles.

The specific epithet candidum is derived from the word candidus meaning pure, white.

The Madonna Lily is one of the oldest cultivated plants. It has been with us for more than 4000 years and has been immortalised in many a work of art. Depictions of lilies adorned the column capitals of ancient civilizations in Egypt, Assyria, in the Minoan culture and in the Temple of Solomon in Jerusalem. The oldest portrayals of the Madonna Lily were produced around 2500 BC in the Egyptian town of Aswan where the lily adorned a stone bas-relief on a royal throne and a sarcophagus.

According to Greek legend we owe the Lily to the Greek god Heracles and his desire for immortality. The milk of the goddess Hera was said to confer this immortality. So Heracles stole up to the sleeping goddess of women and drank from her breast. While he was doing this, a few drops of milk fell to the ground and are said to have grown into lilies.

Even in the ancient world the Madonna Lily was regarded as a symbol of beauty, fertility and wealth. It is mentioned several times in the Bible: for example in the first book of Samuel, in various psalms, in the Song of Songs, in the Gospels of Mathew and Luke. In the Middle Ages it became the symbol of innocence and purity and was dedicated to the Virgin Mary. It was

thought that the dead should come before God pure. So the Lily also became a flower of the grave. According to ancient legend lilies were said to grow spontaneously on the graves of people who had been wrongly accused of misdeeds during their lifetime. The Lily was testimony that the soul was pure and had gone to God.

The Romans incorporated the Lily in their crest as symbol of purity, hope and integrity. The royal House of Bourbon took up this idea around the year 1200 and since then the stylised three-petaled lily has been the royal symbol par excellence. However, it is also found in many civil coats of arms as symbol of hope.

Magical properties are also attributed to the Madonna Lily. The bulb is said to protect against charms, sorcery and spells. It is said that Madonna Lilies picked when Venus and the Moon are in Taurus or Libra can be used to brew excellent love potions. Washing with a mixture of Lily juice and an extract of the medicinal herb Horehound is said to keep women young and beautiful. The flowers and bulbs of the Madonna Lily are edible. The flowers have a pungent taste and are also a charming and tasty garnish.

The Madonna Lily is the second Queen of the Flowers. Side by side with the rose it has been mankind's companion for thousands of years. The Rose has an affinity to the sun, the Madonna Lily to the moon. The Lily lives in the polarity bulb – flower. The bulb, which grows unusually close to the surface, has more in common with leaves and is in direct contact with the leaf rosette which provides it with nourishment. Both are oriented around the earth's surface, the skin of our planet. This indicates a relationship to the human skin. The bulb is an extremely compacted expression of leaf and stalk, a watery, mucilaginous tumescence at the boundary with the earth. This tense, compacted bearing practically explodes into the stem which shoots upwards like an arrow and at the very top of which the extravagant blooms open up to the sun and the warmth. The Madonna Lily is able to transform the stasis and hardness of the bulb into intoxicating beauty.

The mucilaginous bulbs of the Madonna Lily are used in WALA's Dr. Hauschka Renewing Night Conditioner and Regenerating Intensive Treatment. The rhythmised extracts help to preserve the moisture of the skin and are a model for the dissolving of connective tissue indurations and callosities. 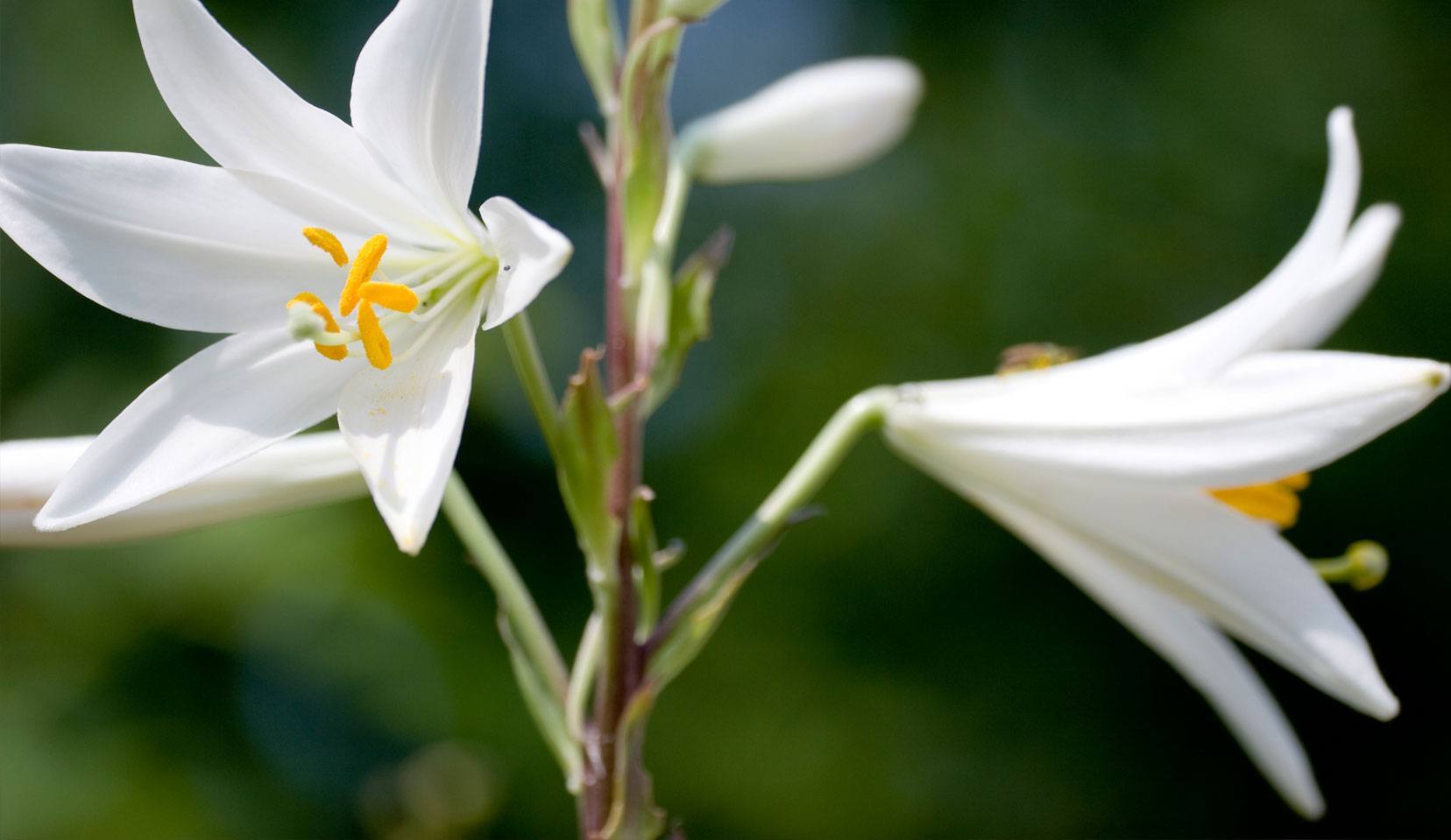