Apple: rich in vitamins, especially provitamin A and vitamins B1, B2, B6, C and E; minerals such as potassium, iron, calcium and zinc; trace elements, fibre, antioxidants, polyphenols, flavonoids and organic acids. 75 percent of the substances contained are found in or directly beneath the apple skin.

At the height of spring in May and June, apple trees are exuberantly covered in delicate apple blossom. The effect of these flowers is particularly magnificent on naturally growing trees, which tower to heights of up to 15 metres and are topped with broad crowns. As the season wears on, the pollinated blooms lose their white or pink-tinged petals, which float to the ground, covering it like a layer of fresh snow. For a full harvest, fruit only needs to develop from five percent of the tree’s blossoms. The apple tree draws on all of life and is a key source of nectar for bees.

From a botanical perspective, the apple is not a fruit but an accessory fruit; it grows from the receptacle that surrounds the ovary rather than from the ovary itself. The dried structures on the base of the apple, opposite the stem, are the remains of the flower. Like with all members of the rose family, these are five-petalled. When sliced in two, the apple also reveals a five-part core, created from the five carpels that bear the ovules. From a botanical perspective, the parchment-like core chambers or skins make up the fruit, or more accurately, the aggregate fruit.

Polyphenols and flavonoids, both of which are found in abundance in apple skin, are anti-inflammatory, neutralise free radicals and protect against cell damage. Long-term studies have shown that eating apples every day can help prevent intestinal cancer. Apples can also help prevent damage to nerve cells, lower cholesterol levels and regulate blood sugar levels. Laboratory tests have shown that oligosaccharide from apples is more effective at killing cancer cells than chemotherapy.

The scientific name ‘malus’ is derived from the Greek ‘malon’, meaning apple, although the origins of this term are still unknown. The term ‘domestica’ (from the Latin ‘domesticus’ = home, indigenous) is added to the name of fruit trees cultivated in close proximity to homes.

The apple is one of the oldest cultivated plants: not only have apples been found among the burial items in the tombs of pharaohs, but apple trees seem to have been grown in Kazakhstan since 10,000 B.C. The name of the country’s largest city, Almaty, even translates as ‘apple city’. Ancient manuscripts show that in the 8th century B.C., the Babylonians planted apple trees in the medicinal plant garden of King Marduk-apla-iddina (8th to 7th century B.C.) for medicinal purposes. The Romans brought the domesticated apple to Northern Europe from Asia via Greece.

In all Eurasian cultures, the apple is a symbol of love, sexuality, fertility and the nourishing value of a mother’s milk, and is associated with certain deities. For the Babylonians, this was the planetary goddess Ishtar, who embodied Venus. For the Greeks it was Aphrodite and for the Teutons, Idun, the goddess of youth and immortality. Like the Greek nymphs known as the Hesperides, Idun guarded over golden apples in her garden. These provided eternal youth and immortality. Apple trees or apples on pictures of Mary, Joseph and Jesus represent Mary’s great fertility.

However, eating an apple is also associated with the bringing of knowledge and change. Adam and Eve were evicted from the Garden of Eden after taking a bite from an apple from the tree of knowledge. In ancient portrayals of the Last Judgement, those who have been absolved of all sins hold an apple in their hand as a symbol of their re-acceptance into Paradise. When Mary hands Jesus an apple in ancient paintings, Christ takes on the sins of this world. In handing him the apple, Mary gives him the strength he needs to do this.

On biting a poisoned apple, Snow White falls into a deep sleep. In both this fairy tale and Mother Hulda by the Brothers Grimm, where the apple tree calls “Oh, shake me, shake me, we apples are all ripe”, the apples represent the confrontation with female sexuality. In these cases, they are once again symbols of love.

But to return to the Romans... These first started carefully growing apple trees in Central Europe, passing on the art of grafting. They knew that when trees were grown from the seeds of cultivated apple trees, their apples did not have the same properties as those of the mother tree. In scientific terms, apples are not homozygous. To reproduce the best varieties, the Romans therefore grafted cuttings to strong root systems. From around 100 B.C., they passed on the knowledge of this technique to their northern provinces where they planted up to 1,000 apple varieties.

The present form of the cultivated apple tree is thought to have resulted from the natural crossbreeding between the Asian wild apple (Malus sieversii) and the Oriental apple (Malus orientalis). The apples from the first crossbreeds were still small and extremely bitter. Over thousands of years, 20,000 to 25,000 apple varieties have been created through crossbreeding and selection. The German names of these reflect their many different shapes and sizes; apples can be divided into the several different species: Klapperäpfel (schlotters), Gulderlinge (gulderlings), Rosenäpfel (rose apples), Pfundäpfel (rambours), Renetten (reinettes), Streiflinge (stripelings), Spitzäpfel (pointlings) and Plattäpfel (flat apples). Only around 30 varieties are found in today’s shops; the others are not considered profitable. In the 1960s, the EC even encouraged apple growers in Germany to fell their trees, offering 50 pfennig per tree (at the time, this equated to the purchase price of two and a half eggs or 100 g beef). Five million trees fell victim to the campaign, which aimed to promote the Golden Delicious as the standard apple. Fortunately, not everyone got on board with the campaign and apple-loving scientists known as pomologists have been able to record 2,000 different apple varieties that still exist in Germany and make an important contribution to the country’s biodiversity. Retaining the varieties will require constant attention and propagation as apple trees only live for about 100 years.

The apple tree is a plant that remains with us all year round and is so much a part of everyday life that we can trust it with our eyes closed. As a cultivated plant, there have always been close ties between people and apples. In Night Serum, apple blossom invites the skin to open up and facilitates the nighttime renewal processes. As a fruit, the apple abounds with health and freshness – we desire its radiance and want to see this reflected in the mirror each morning.

Night Serum is the first Dr. Hauschka skin care product to use apples. Dr. Hauschka Skin Care selected the rose apple to reveal the full beauty and diversity of the fruit. The apples needed to be crunchy, juicy and as soft, rosy and full of vitality as your skin after a good night’s sleep. There also needed to be a balance between sweetness and acidity, as well as a protective yet delicate skin. And so, Dr. Hauschka chose rose apples, large amounts of which go into the products. We obtain the apples from German apple growers who use controlled organic farming methods. The freshly harvested blossoms and fruits are prepared using a proprietary production process – the apple blossoms as a rhythmitised extract and the fruit as apple water. 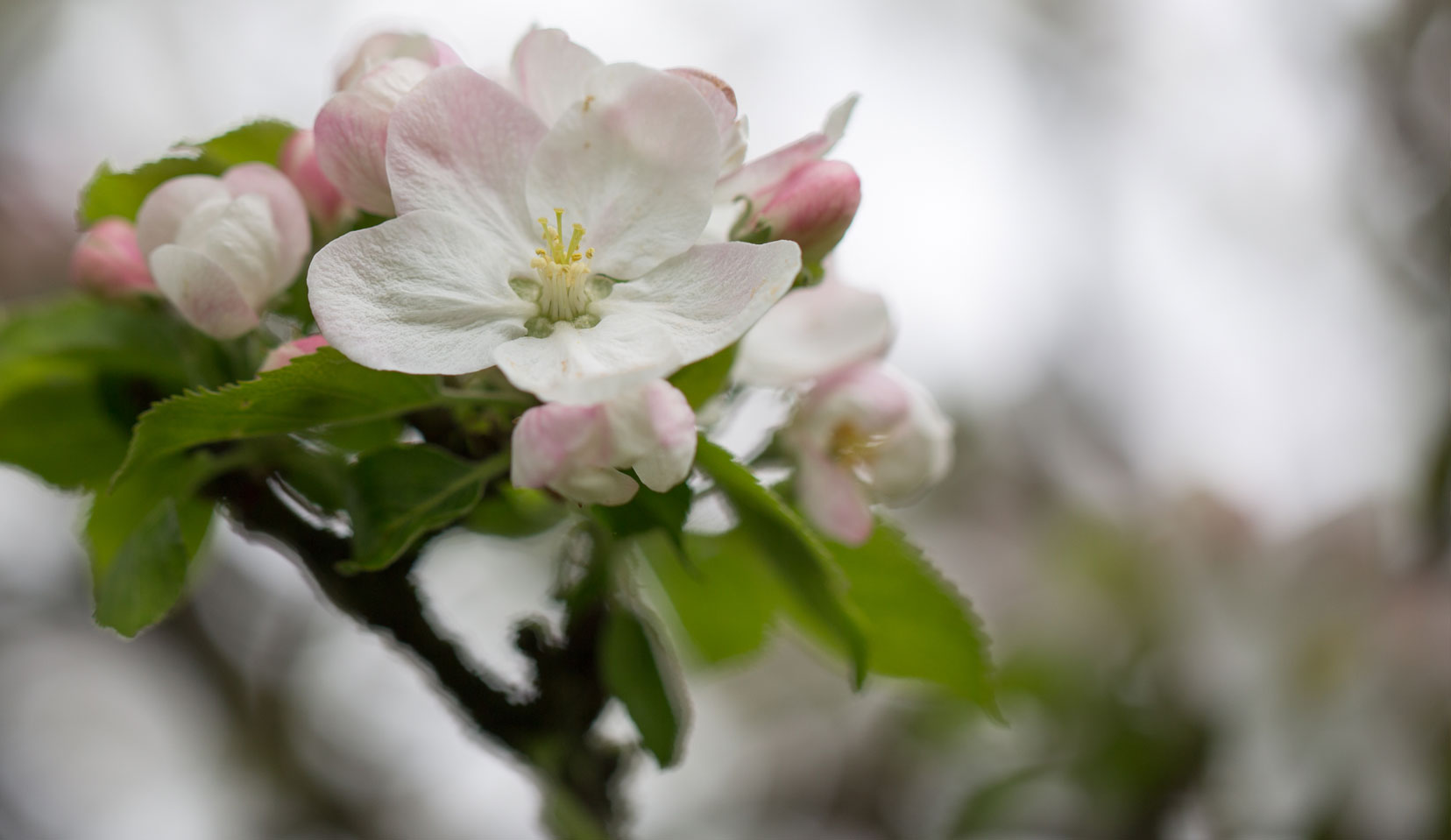