You can recognise St. John's wort immediately by the dots: if you hold the flowers up to the light you will see numerous small bright spots: glands containing a fluid of essential oils and resin. If you rub the golden yellow flowers between your fingers they will be stained blood red, the characteristic colour of St. John's wort oil. This wondrous colour change results from the fact that light and oxygen break down constituents of the flowers. The perennial St. John's wort plant grows to a height of 90 cm. From May/June to August/September the many branched, woody stems are covered over and over with the five-rayed flowers. This oil-rich plant, whose leaves are also densely covered with oil glands, grows by the wayside, on banks, on grassland, in open woods and scrub, preferably in the full sunlight which it requires for luxuriant growth.

Paracelsus was convinced of the wound-healing, antiseptic and eliminating action of St. John's wort. He saw the pore-like perforation of the leaves as an indication that the plant could be used to treat any kinds of opening in the skin, either internally or internally, and that it would also support elimination through the pores.

In fact, St. John's Wort stimulates the blood circulation and carries anabolic and nourishing processes to the sphere of the nerves and the senses.

With its calming, pain-relieving and wound-healing properties it brings relief not only in chapped, cracked and irritated skin accompanied by redness but also in mild burns. Embrocations with the characteristic red oil help relieve nerve pain, rheumatism, lumbago and sprains. St. John's wort is used internally for treatment of depression. It is also used to treat bed-wetting, which usually has emotional causes.

There is frequent mention of photosensitization by St. John's wort. In fact the skin reacts more strongly to sun exposure after internal use of the herb. This has at any rate been observed in animals: light-skinned grazing animals who had eaten a lot of St. John's wort were seen to develop skin rashes and blistering. In humans such effects have only been

obtained, if at all, after drastic overdose with St. John's wort preparations. The effect very rarely occurs when St. John's wort is applied externally, for example as oil. On the contrary, it even has a soothing effect on the skin after sunburn.

The name Hypericum is thought to derive from the fact that you can see an image through the translucent glandular pores on the leaves (Greek hyper = over, ericos = image).

There are numerous legends attached to St. John's wort. According to one it originates from the blood of John the Baptist, according to another St. John the Evangelist is said to have gathered the plant drenched in the Saviour's blood from beneath the cross. The naming of the plant St. John's wort was supported particularly by the fact that the Knights of the Order of St. John of Jerusalem, whose patron saint is John the Baptist, already used the plant for treatment of wounds at the time of the Crusades.

In his anger about the extraordinary healing powers of the plant the devil is said to have attacked it with a needle and perforated it thousands of times. This legend is supported by the numerous oil glands on the leaves which appear as black spots and look like pinpricks when the leaves are held up to the light.

The red juice which emerges when the flowers are crushed was interpreted by the Germanic tribes as the blood of the sun god Baldur who sacrificed himself to the earth every year at the time of the summer solstice.

St. John's wort, one of the magical plant beings of the summer solstice, devotes itself to the sun like no other plant. It is said to have the greatest healing powers at the Feast of St. John (24 June), three days after midsummer night, when it is at the height of its bloom and is imbued with the full power of the summer sun. At this time the light has reached its climax and the sun joins in matrimony with the earth. Since time immemorial people have honoured this day of union between the light and the earth, between spirit and matter, with great feasts. A remnant of this tradition can be seen today in the bonfires lit on midsummer's night.

On account of its ability to drive away demons and evil spirits St. John's wort was also called "fuga daemonum" and hung on doors and windows of houses and stables to keep away storms and evil spells.

Incidentally, a decoction of St. John's wort can be used for dying textiles. It produces a yellow to greenish-yellow colour.

The radiant yellow flowers of St. John's wort which stretch up towards the sun on straight stems, contain the highest concentration of active constituents at the time of the summer solstice. This seems to be an expression of its sunlike character. The luxuriant wealth of flowers contrasts starkly with the dry, hard wood of the plant. That which is between the flower and the branch shows a tendency to contract, to dry. This is the expression of a forming character which brings order to that which is excessively in flux.

This is the field of tension in which we find the numerous healing effects of this old medicinal plant. As plant of the light it drives away the darkness in human beings, and thus helps internally in depression, externally in sunburn. As bringer of order it supports the organism in all anabolic processes of the nerve-sense organs, whether as wound-healing agent or in treatment of depression. 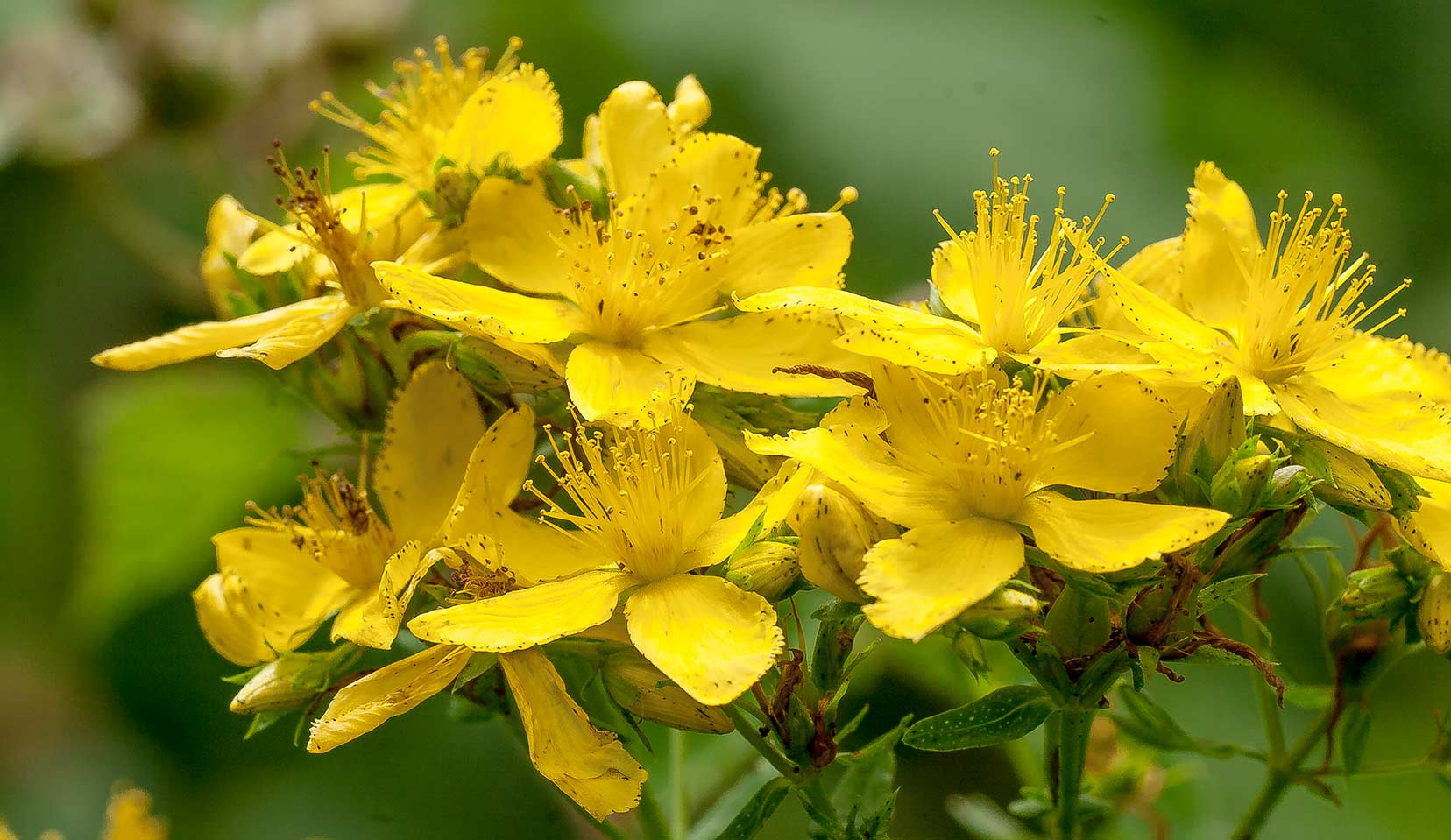