No one who has travelled in India will ever forget the characteristic scent of sandalwood. It permeates rooms, lingers in clothing and envelops the body. The source of this scent is a tree that can grow to a height of ten metres, is evergreen and flowers throughout the year. Sandalwood is not fussy about where it grows – whether in fertile valleys or on dry mountainsides, it thrives anywhere. Indeed, the scent of its wood seems to be more intense the dryer and poorer the soil it grows in. Its leaves are large and leathery, somewhat like laurel leaves. Its unscented flowers usually have four petals which on opening look yellow but gradually take on a deep red colour. They grow in clusters at the tips of the branches. Sandalwood trees are semi-parasites. They derive some of their nourishment from the root systems of neighbouring plants, but can also survive alone, without a host plant. A whole range of different plants can serve them as host – for example tall grasses such as Kans grass (Saccharum spontanum), palms and plants of the Araliaceae family. On contact with the roots of the host plant, the root tips of the sandalwood saplings form an organ called a haustorium which penetrates the roots of the host. As this grows, it forms nodules up to two centimetres in size which allow the sandalwood tree to take over the host roots. The sandalwood tree draws so much nourishment from the host plant that the latter struggles to grow.

Essential sandalwood oil obtained from the wood has antispasmodic and antibacterial properties and is an antiviral effective against herpes viruses. The essential oil obtained from the reddish heartwood plays an important role in the perfume industry. In order to obtain the sought-after oil, trees are felled at 30 to 60 years of age. To harvest the heartwood, the felled trunks of the trees used to be left lying on the ground for Nature to take its course. White termites would attack the bark and the soft sapwood, until a few months later only the almost cleanly stripped hard heartwood remained. Today, machines are employed to strip the trees. After this the heartwood is chipped and ground to a powder so that the essential oil can be obtained by means of steam distillation. Sandalwood chippings supplement chewing tobacco and are suitable for smoking on charcoal. Incense sticks can also be made from the ground wood. For this, wood meal is mixed with a binding agent, for example gum arabic, and charcoal, then rolled into sticks and dried.

The sandalwood water which is also generated during steam distillation is used to give a masculine note to aftershave, for instance.

The oldest mention of sandalwood goes back to the fifth century BCE and is to be found in the Nirukta, a commentary on the Vedas of ancient India. Since termites are unable to destroy the hard, aromatic heartwood, in India the tree has always been regarded as a protective tree whose scent drives out evil spirits. The wood was dedicated to the god Shiva and was used in the building of temples and to make statues of the gods.

According to the Hindu faith, sandalwood aids higher reincarnation. Hence deceased rulers were embalmed with the essential oil, and even today sandalwood is added to the funeral pyres of rich Indians. According to one Indian legend the sandal tree is always surrounded by snakes bewitched by its sweet scent. Moreover, sandalwood powder is thought to neutralise snake and scorpion venom. In yoga, sandalwood is linked to the Root Chakra and is supposed to waken the kundalini snake, i.e. to have an aphrodisiac effect.

Arab physicians brought sandalwood to Europe in the Middle Ages, where it first appeared in Italian pharmacies in the 15th century. The German

naturalist, physician and botanist Adam Lonicer (1528-1586), also known as Adam Lonitzer or Adamus Lonicerus, mentioned sandalwood in his work on herbs, the Kreuterbuch, published in 1557. He described it as blocking flows; strengthening heart, stomach and liver; cleansing blood and combating thirst and heat. In the middle of the 19th century, doctors treated gonorrhoea sufferers with sandalwood. Ayurvedic medicine describes sandalwood as bitter, cooling, astringent and soothing. It uses compresses of powdered sandalwood with rosewater as a remedy for inflammation and skin diseases.

In aroma therapy sandalwood is used to counteract the consequences of excessive mental work. The harmonising fragrance is thought to calm, release tension and help restore inner peace.

Incidentally: although similar in name, red sandalwood (Pterocarpus santalinus L.) is not related to the white Indian sandalwood. The red wood of this tree, which belongs to the Fabaceae or pea family, is popularly added to tea mixtures for a touch of colour. Today, this wood is not considered to have any medicinal properties. For a long time it played an important role in wool dyeing.

Sandalwood water supplements the formula for the Dr. Hauschka Regenerating Intensive Treatment. It contains the hydrophilic portion of the distillate and gives the skin tone and vitality. 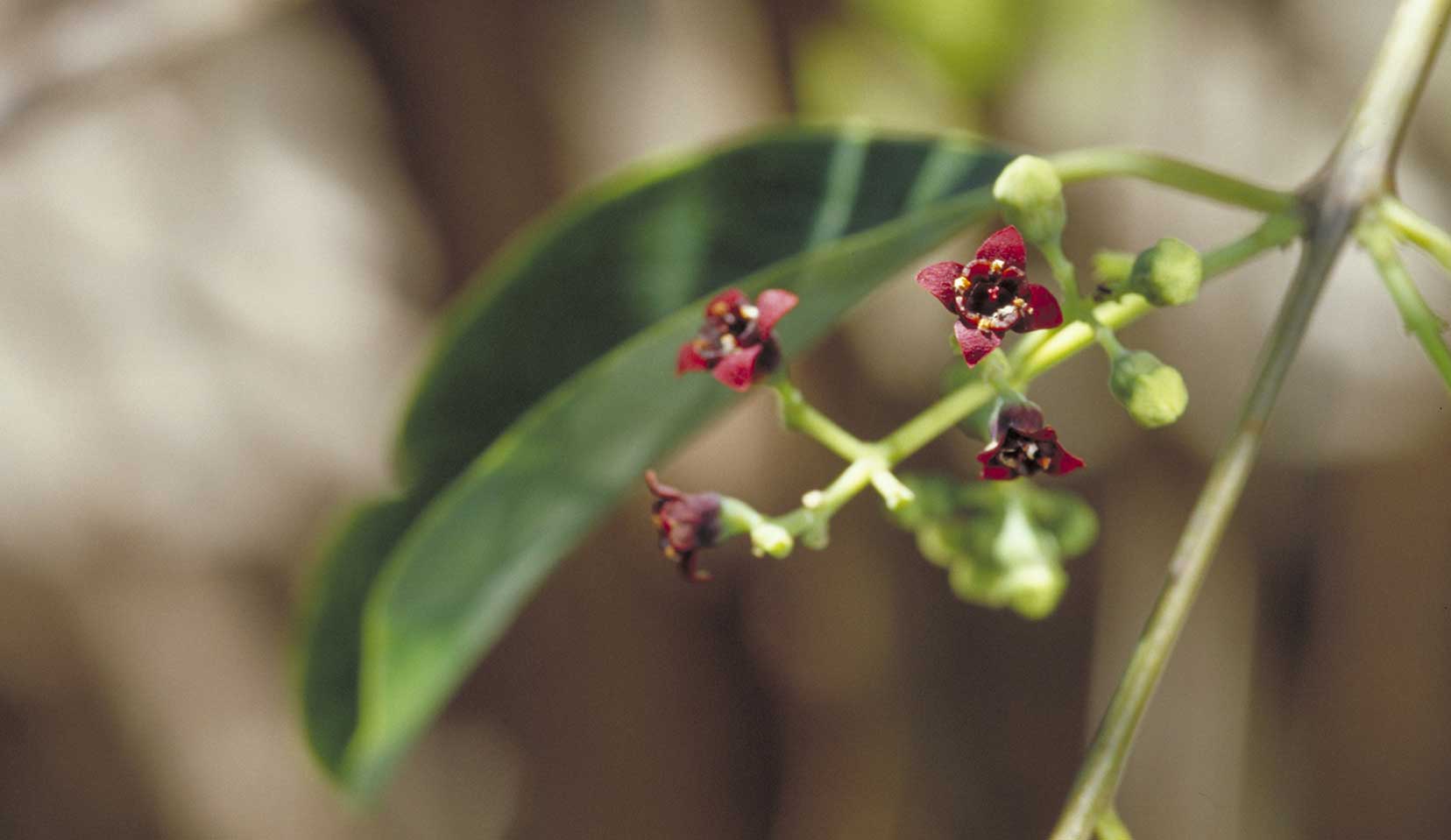