The pomegranate is just as we expect the orient to be: opulent, deep-red and heavy on the outside, and on the inside full of plump, juicy cushions in which we find the seeds. Around 400 in number, they huddle together within structured compartments - so tightly that they can only be removed with difficulty. The outside of this striking fruit – which is botanically a false berry – looks hard and leathery. It grows on trees which can reach a height of up to five metres, although cultivated plants are usually pruned to shrub form. From July to September its branches bear large red flowers with a striking, crown-like calyx. These produce the sought-after fruits which ripen from September to December. Incidentally, unlike other fruits pomegranates do not continue to ripen after picking. Botanists describe such fruits by the curious technical term “non-climacteric fruit”.

Pomegranates not only taste good, they have great health benefits. Antifungal, antioxidant, anti-inflammatory and wound-healing properties have been ascribed to them. They are thought to be good for the stomach, beneficial in cases of diarrhoea, arteriosclerosis, hypertension and bacterial infections and have a positive influence on menopausal complaints.

The name pomegranate comes from the Latin pomum = apple and granum = grain, a reference to the many seeds which the fruit contains. The Phoenicians, a people who formerly lived in what is now Lebanon and Syria, introduced the pomegranate to the Romans, who gave it its scientific name Punica.

People have been cultivating and using pomegranates for around 5,000 years. The oldest evidence of this comes from the Near East. Whilst pomegranates are enjoyed as a fruit or syrup (grenadine) in most countries, in India they are used as a spice and the Iranians use them for cooking. Up until the Middle Ages folk medicine used pomegranate root, bark and boiled peel as a worm treatment.

In antiquity the red pomegranate with its abundance of seeds was regarded as the fruit of paradise, a symbol of fertility and immortality. In Greek mythology it was Aphrodite, the goddess of love, who planted the pomegranate on the island of Cyprus as a tree of life. The Roman goddess Juno held a pomegranate in her hand as a symbol of marriage, and brides wore a crown of pomegranate blossom. The pomegranate also has a place in Judeo-Christian mythology. The Song of Solomon mentions pomegranate juice as the nectar of lovers, whereas in Christian art its meaning is reversed and it becomes

the symbol of purity and virginity. The pomegranate has regal associations, probably because of the residual calyx which crowns its red fruit and is said to have inspired the shape of King Solomon’s crown. The imperial orb of the Holy Roman Empire of the German Nation, a symbol of power, was based on the pomegranate.

The Arabs probably brought the pomegranate tree to Spain around 800 to 900 CE, where it gave its name to the province and city of Granada. It still adorns the coats of arms of both Granada province and Spain itself.

The skin of the pomegranate furnishes a yellow dye which turns deep blue when combined with iron mordant and is used in the manufacture of oriental carpets.

Incidentally, the oldest European hothouse plant is a pomegranate tree. This tree, which arrived in 1653 via Venice, still stands today in the Herrenhausen Gardens in Hanover.

The pomegranate is resistant to drought and can store much moisture and vitality in its fruits. WALA processes the whole fruit, including the peel, for Dr. Hauschka Skin Care products, obtaining a preparation that promotes regeneration of the skin. The pomegranate peel is an important ingredient because its extract inhibits an enzyme that is responsible for the breakdown of collagen in ageing skin. At the same time, the extract activates an enzyme that is involved in the production of collagen. The pomegranate seed oil contained in the whole-fruit extract stimulates cell division in the keratinocytes, cells which produce the important skin-strengthening protein keratin. 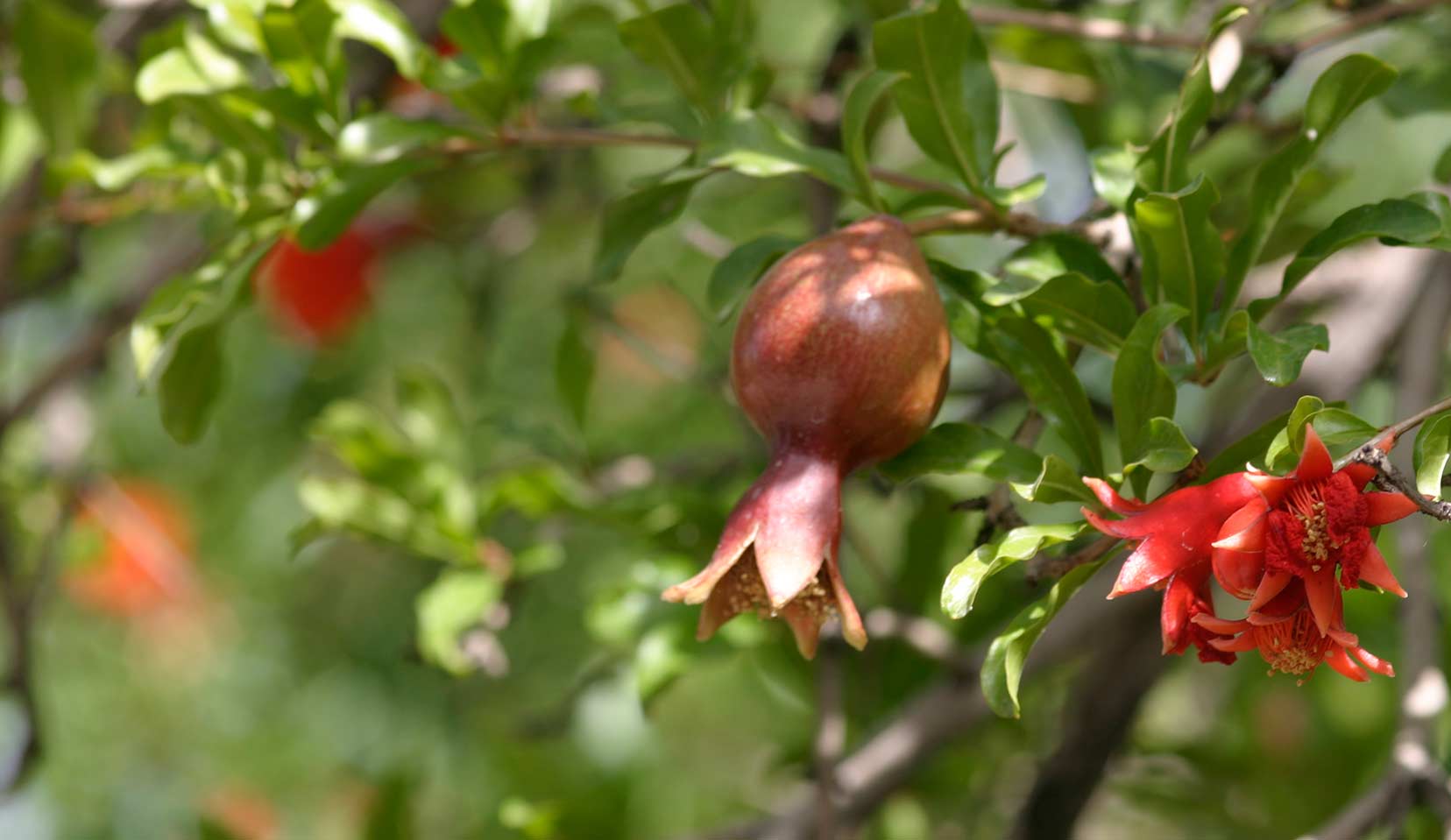