From June to August a shining blue sea of flowers that appears covered with a shimmering mist is visible far and wide. Burrage? Borage? The names are far less enchanting than the appearance, which captivates the beholder. When you look more closely you are tempted to turn upside down to get a proper look at this exotic-looking flower, copying the bees which hang head downwards on the lips of the nectarrich flowers. The flowers, which appear almost to come from another world, stand in thick clusters with their heads nodding towards the ground. With the pistils and anthers forming a prominent cone in the centre, the flowers look almost like insect heads surrounded like a star by five green and five delicate, brilliant blue petals. This annual herb, which grows to a height of 60 centimetres, is covered all over with very fine, stiff hairs, socalled bristles, which shine in the sunlight like glittering mist and protect the otherwise sensitive delicate plant.

Borage has astringent and antiinflammatory action, promotes wound-healing and is a venous tonic. It is used to increase the urine volume and as part of treatments to rid the body of excess water. In homeopathy it is used for nervous weakness of the heart. In folk medicine it is known as medicinal herb for bronchitis, cough, sore throat, weak heart, rheumatic complaints, dysphoria and constipation. Its juice mixed with watercress juice and dandelion juice is said to be an excellent blood cleansing agent which also has a positive action on the skin. The silicic acid contained in the hairs also has a positive effect on skin and hair.

The origin of the scientific name Borago is not quite clear. It may be derived from the Spanish or late Latin borra = rough-hairy. Borago would then have given rise to the Italian boragine and the French bourrache, from which the German Borretsch and the English Borage were then derived. In German the herb is also called Gurkenkraut = cucumber herb, a reference to its use in pickling cucumbers.

Borage was probably brought to Spain by the Arabs in the Middle Ages and then spread throughout the entire Mediterranean region. Originally a cultivated plant it is now regarded as a garden escape.

Because it is so rich in nectar Borage is considered one of the best plants for attracting bees. In fact it enters into a special kind of partnership with the bee. In the middle of its flower the filaments and anthers form a central cone in which the pollen collects. Only when the bee, searching for nectar, pushes its head between the filaments does the pollen fall out and can fertilise the flower. For ants Borage has another delicacy to offer. At the attachment point of the ripe seeds or nutlets they find a very fatty part for which they carry away the nuts: the ideal transport system for dispersal of the plant.

The herb, which has a pleasant taste of fresh cucumbers, can be added raw to salads or cooked to give a spinach-like vegetable. It is also the chief

ingredient of the German dish Frankfurter Gruene Sosse (Frankfurt Green Sauce). Some people see in the Borage flower, with its magical aura, the much sung blue flower of the German Romantics, the symbol of infinite romantic longing.

Borage grows prolifically but never excessively so, its growth always remaining well-ordered. The flowers, their blue colour signalling coolness, incline their heads to the ground, a gesture of quiet formedness and heaviness. However the plant does not remain in this heaviness but is dispersed with the help of the bees and ants which collect the nectar and the seeds. Thus Borage causes sluggish or stagnant processes to flow again in a formed manner and cools inflammation. 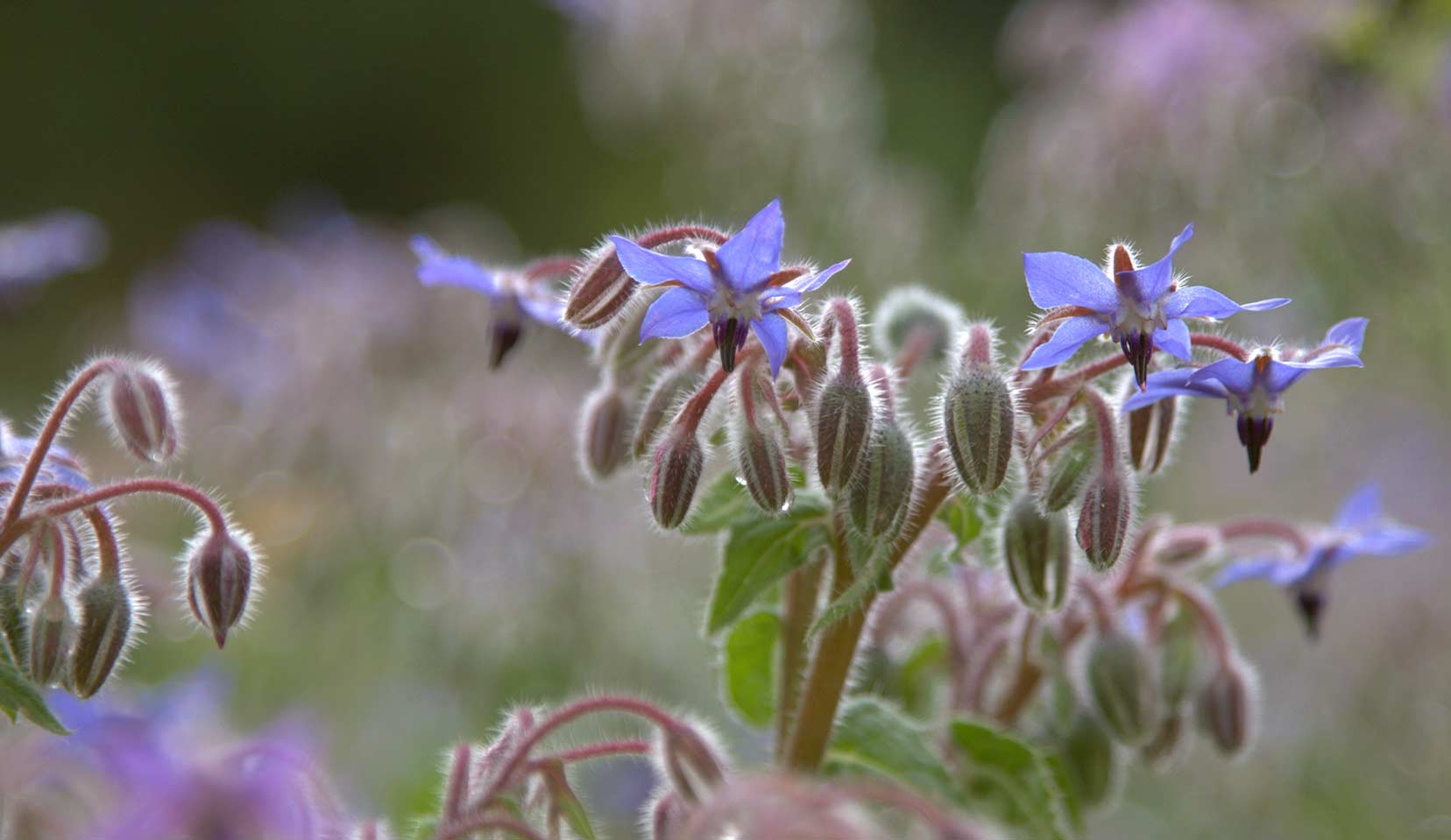