Provitamin A (carotene), vitamin B1, B2 and C, flavonoids, essential oil.

When you think of carrots, you likely think of using them for cooking or as a healthy snack and may wonder what this vegetable is doing amongst these portraits of nurturing herbs for the skin. But please take note: this orange root shouldn't be underestimated. And what's more: there were times when people would have wondered what carrots were doing in soups and stews. But more about that later.

The carrot that comes to our table is the product of a long period of cultivation and is derived from its wild sister, the Wild Carrot. When you look at the root of the wild variety, which is found in meadows and at the edges of fields, it is hard to imagine that this could be the ancestor of our fleshy, succulent garden carrot. The spindle-shaped root of the wild carrot is dry and woody; only its smell is reminiscent of our root vegetable. The flower, which we seldom see on our garden carrot, is impressive. Fully grown, the biennial plant reaches a height of up to one meter in its second year. The woody stem, softly embraced by the finely divided leaves, is crowned throughout the summer and into October by flattened white flowerheads known as the terminal umbels, which are almost as big as the palm of a hand. The umbels are composed of numerous small individual blossoms which are arranged in a single plane. Wild carrot is easy to

distinguish from the other members of the large Umbelliferae family by having a few single flowers at the center of the umbel which are deep purple in color. The garden carrot has lost this feature through cultivation. Instead, it has a reddish-orange root which is lacking in the wild variety which has a white root. As the flower fade,s it contracts, giving it the appearance of a nest for its ripening fruits. These carry numerous small bristles on their surface.

In conventional medicine, freshly grated carrot root or juice is used mainly for the treatment of nutritional disorders in babies, such as vitamin A deficiency and threadworms. They are occasionally used as a diuretic (to promote the elimination of water).

People who eat a lot of carrots may take on an orange-toned complexion. This healthy vegetable produces these effects through its provitamin A, which is converted to vitamin A in the human body. Provitamin A is fat-soluble and therefore needs the presence of fat to be taken up by the body. Carrots should therefore always be eaten with a little fat. Important minerals and trace elements in the carrot of calcium, folic acid and selenium support the immune system and contribute to the development of beautiful hair and nails.

The name carrot is derived from the scientific name carota. This Latin word means "burnt," referring to the purple-red color of the earlier cultivated forms.

The carrot is a plant with a rich history. It was cultivated by the Germanic tribes who called it morha - root. This is the origin of the German word for carrot: möhre. Carrot seeds were also found in Swiss pile dwellings. The Ancient Romans and Greeks only mentioned the carrot as a medicinal plant, knowing of its diuretic action. However, they presumably found the root too woody to eat as the plant had undergone little cultivation by that time. Then Charlemagne recommended the cultivation of carrots and from the Middle Ages onwards they were cultivated on a large scale.

Through the labors of cultivators, we now have 500 different varieties of carrots. It started with just two: one yellow and one violet. It was only in the 17th century that the Dutch succeeded in cultivating the carrot with the orange color we know today, which comes from its high ß-carotene content. Incidentally, the violet color is produced by so-called anthocyans: pigments which give flowers their color, such as the purple central flowers of the wild carrot. In England, where the carrot is also called Queen Anne's Lace on account of the filigree structure of its flowers, the following story is told about how these dark flowers came about: It is

said that Queen Anne pricked her finger while lace-making and that a drop of blood fell into the middle of the piece she was making. There is no scientific explanation for this phenomenon of the central purple flowers.

Roasted and ground carrots can be used as a coffee surrogate. Chopped and steamed carrot greens make a tasty vegetable. 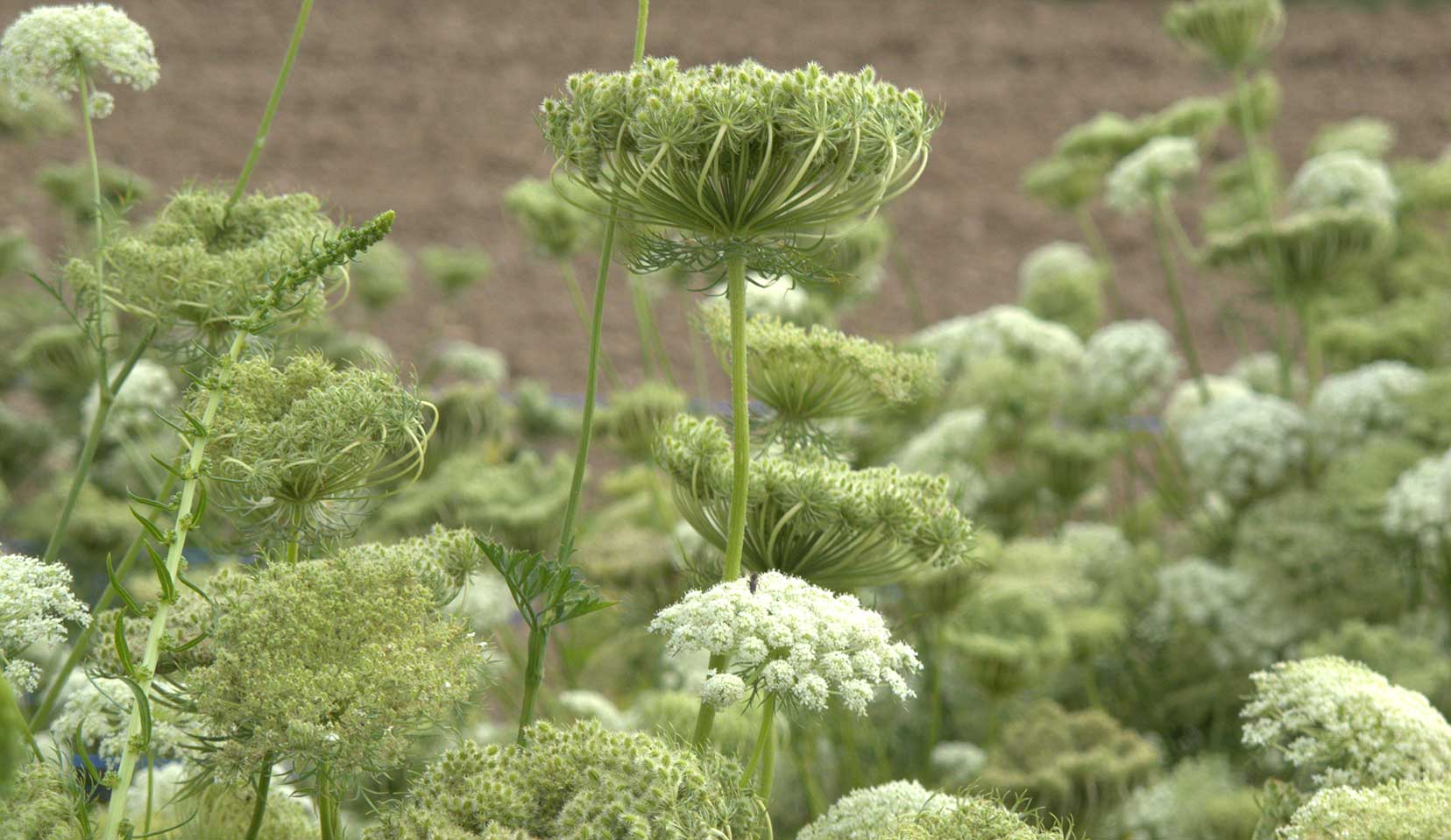